The Wet and Wintery “Arid Region”

Leaving Yulara behind we set off one rainy morning to cycle towards Coober Pedy, some 740km away. To our delight, the winds had switched direction since we arrived and we had a tailwind again, this time pushing us eastwards and away from the still visible landmark of Uluru.

For weeks we had been hearing from other campers that the epicentre of the current mouse plague was around Erldunda, the area we were heading towards. Mice had already gnawed several holes into our panniers and we were tired of the additional hassle to make our camp mouse proof, so we devised a new strategy to get us through this area without any more damage: we would wild camp every night. We have found the mice in campsites much more aggressive as they are accustomed to eating camper’s foods, whereas the mice out in the bush are still curious but not as desperate to eat into our supplies.

The nights were very cold and we often found a layer of frost on our kit in the morning, making it quite uncomfortable to peel away the damp sleeping bag and take off three layers of merino wool and fleece to put our cycling clothes on. During breakfast, we waited for the sun to appear above the horizon, warming us up a little and thawing the ice on our gear. It is usually 9am by the time we wheel the bikes out from our hidden bush camp and back onto the road, much to the astonishment of passing traffic. 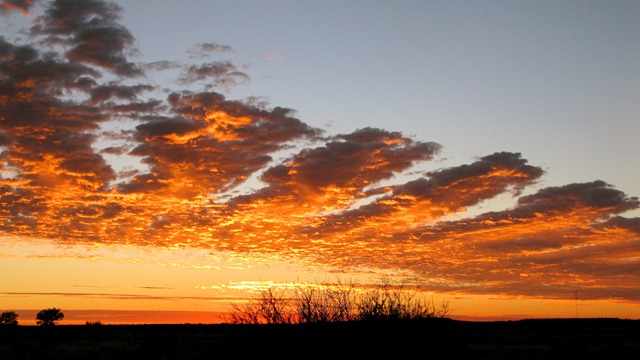 After a couple of days cycling, the terrain flattened out, allowing an unimpeded view of the vast horizons. By our third day on the road the winds had turned again and, as usual, we were battling a relentless headwind. In the afternoon we reached Erldunda Roadhouse and the Stuart Highway. This was the end of our 1,000km detour taking in Kings Canyon and Uluru, and we were happy to finally make some progress south.

At Erldunda we paid for a shower at the campsite after chatting to some guys from New York doing a documentary on camels in the outback. We pushed on to find a bush camp a little further on. Patience was required until the fence retreated a little and we were able to duck behind a rise, only 10m from the road but well hidden from view. We woke up to find a beautiful peach coloured sunrise topped off with a double rainbow arching across the western sky.

Unfortunately the skies soon darkened and driving rain ensured lasting all day. At only 8°C this was a real slog and it seemed our tyres were glued to the tarmac, requiring a huge effort to keep them moving along. 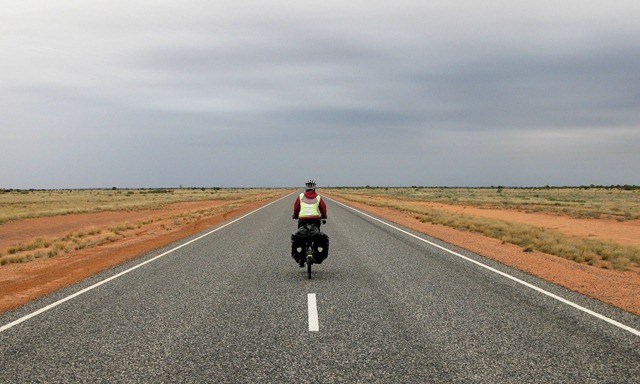 Passing the turnoff to a cattle station, we were amazed by the fact that the homestead was a full 60km beyond the entrance gate. The mailbox of course was located on the Stuart Highway, making life easier for the postman but requiring a 120km return trip for the residents to pick up their mail!

We camped just before the South Australian border and reached the rest area at the border the following morning. After spending nearly two months exploring the Northern Territory and its natural wonders we were excited to reach the next state. 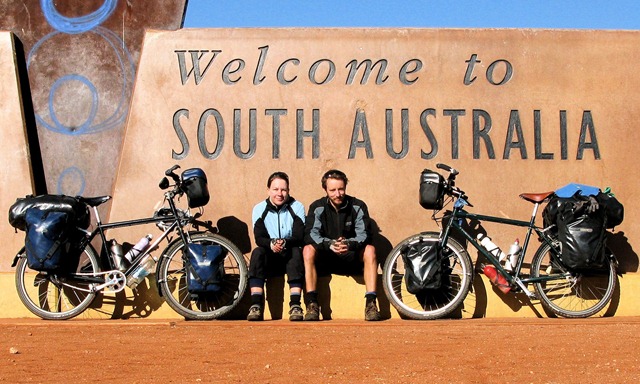 While cycling we saw many mice in the fields near the road as well as hundreds of dead mice flattened on the highway. As expected, the mice still came to visit us every night, climbing up on the tent, rustling around and pulling at our panniers, stealing our valuable sleep but not doing any real damage. The term “quiet as a mouse” really takes on a different meaning when you are kept up by them every night!

On our sixth day of cycling the wind finally died down and the sun came out, lifting our spirits. As we pedalled through the wide open spaces, the sun on our backs, tunes pumping from our Ipods and legs spinning effortlessly we could not think of a better place to be.

Marla Roadhouse had the benefit of a decent shop and a good campsite, giving us the opportunity for a rest day. Our day off was spent, as usual, with doing the laundry, some bike maintenance, restocking on food, eating a lot and blogging a little.

Leaving Marla, we were amazed by the unusual sight of flooded plains, offering a haven for birds following the recent rains. 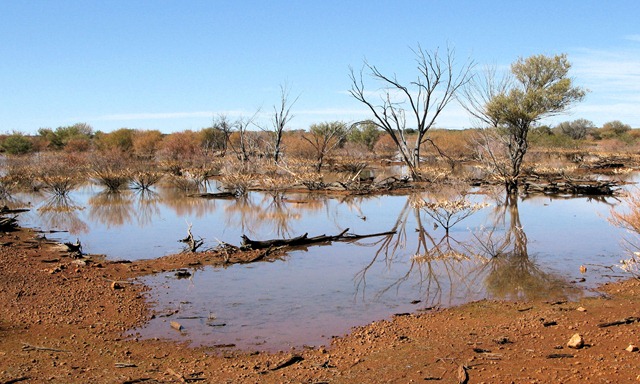 Another day of battling the winds saw us trudging along at 10km per hour, one eye on the road, the other on the bike computer impatiently watching the kilometres accumulate. Cycling at this snail’s pace made us acutely aware of the vast landscape we were trying to traverse. We were such tiny dots crawling along in this vast continent, making our endeavour to reach the southern coast seem almost impossible.

Filling up with water at a rest area, we met a lovely elderly couple, John and Gwen, who invited us into their caravan to eat hot minestrone soup and pancakes. They had just picked a beautiful bunch of wild flowers from near the rest area and were marvelling at the lush vegetation as they remembered this area from previous visits as being completely devoid of life.

Leaving the cosy caravan behind, we only travelled for a few more kilometres before we found a bush camp spot where the ground was covered in a carpet of tiny yellow, pink and blue wild flowers. Just as we enjoyed the blooming desert, so did the birds. Tiny finches nested in a nearby bush, a white owl and later a majestic eagle swept by, a flock of screeching cockatoos circled around our tent and several crows loudly commented on our activities from nearby mulga trees.

We had really hoped for some more warm weather before we reached the dreary southern winter, but in the morning, threatening grey clouds covered the skies again and another cold day ensued. Bundled up in fleeces, merino wool, windproof jackets and overshoes, gloves and hoods we pushed on. Being cold and tired never makes for happy moods and our tempers flared up over lunch, resulting in us cycling apart for the next 20km before we reunited our forces to beat our common enemy, the wind.

The landscape around Coober Pedy is famous for being harsh and barren, but the current cover of green makes it appear a little more gentle, with flat green and brown pastures stretching as far as the eye can see.

Beneath this unassuming landscape lie 90% of the world’s opal reserves. As we came closer to the opal town of Coober Pedy, we began noticing hundreds of large white and pink ant hills where mining was taking place. Road signs warned visitors of unmarked mine shafts around the area. 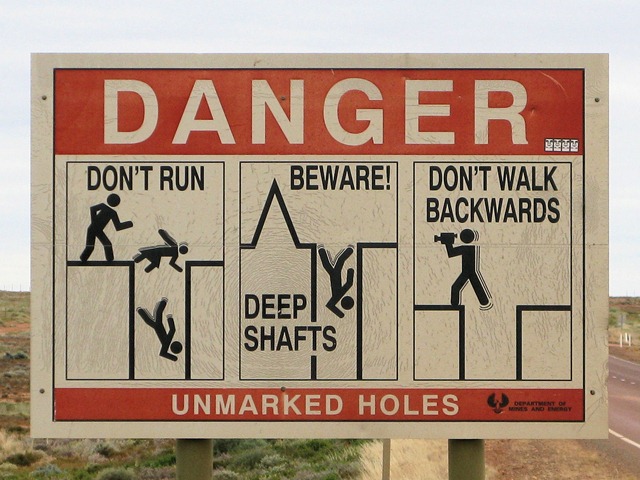 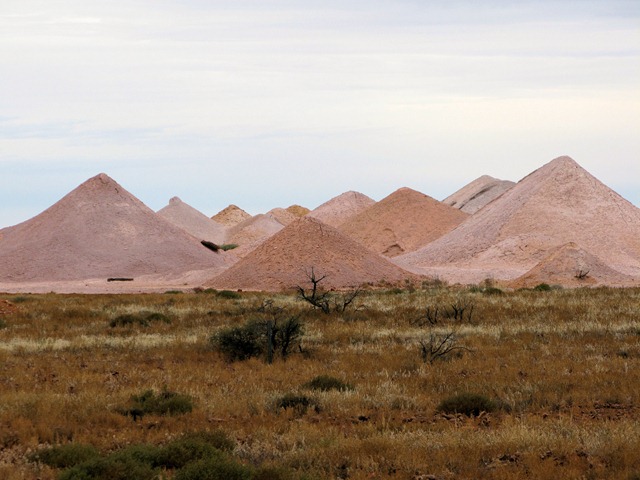 Arriving in town where every second home seems to have some rusting mining relic in its front yard was a little surreal as there are even active mines within the town itself, and many houses, businesses and even churches are built underground, often by repurposing disused mines. In fact, the name “Coober Pedy” comes from the Aboriginal word for “White Man in a Hole”. This promised to be a fascinating place worth a little exploration. ||