“A stranger is just a friend I haven’t met yet.” – Will Rogers

The last week has been a very sociable one for us. Last Monday we left Metz to cycle through the countryside for a couple of days towards Strasbourg. When we pulled into a tiny village to sit down on the local park bench and have a little rest, a passing car stopped and the couple inside asked us to come and drink something at their house.|| We followed them to the house and they invited us inside.

The drinks were supplemented by homemade bread, salami and cheese. When a bakery van passed the house, more food was purchased including a delicious Brioche, which we had for dessert along with our coffees. The couple whose names we never found out were retired farmers in their seventies, who had owned a farm in the village for 50 years. They were a lot of fun and we spent the whole lunch laughing and talking, so we felt very energised when we left. 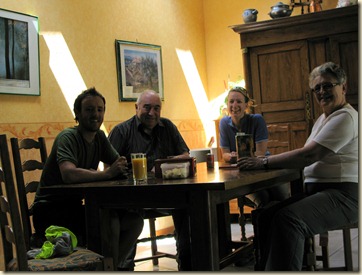 A little while later we stopped in another village, this time at a bus stop, as this was the best place with a bench in the shade. We were having yoghurt when a man on his bike pulled up. He introduced himself as the Maire and welcomed us to his village. We had a nice chat in French and German before we left.

That night we stayed at a campsite where we were the only guests. It really still seems to be the low season in France.

After a couple of days in a rural area we arrived at Strasbourg on Wednesday. In the afternoon we met up with Claire-Marie, who we had met through the Warmshowers website. She and her boyfriend had cycled from France to Mongolia last year. We went to a café and then Claire-Marie showed us around Strasbourg, which has a beautiful old town with charming, well preserved buildings and a lot of cafés and restaurants. 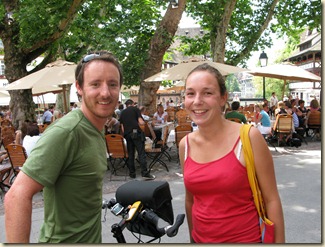 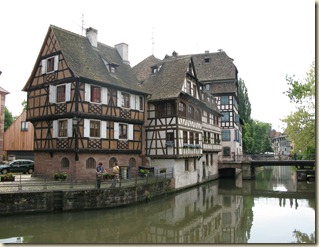 Catherine, who we stayed with in Metz, had told us that her daughter lives in Strasbourg, and she actually called her to ask if we could stay with her. Charlotte was just about to finish her studies and then move to Germany. Together we went to visit a performance on Strasbourg’s main square of Gotan Project, a group of Paris-based Tango DJs. Later, Charlotte and her flatmate invited some friends and neighbours back to the flat, and we had homemade lasagne and a sociable evening. 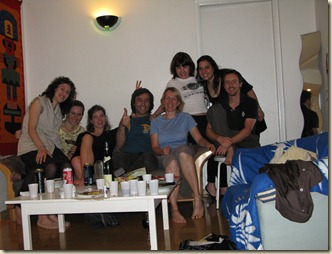 We left Strasbourg early on Thursday to cross the border into Germany. We knew there was a big climb ahead of us, as we were entering the Black Forest. However, we weren’t prepared for the 35°C heat! It was quite a steep 800m climb and very hot, and we really felt every one of the 45kg of bikes and luggage we each had to get up the hill. We soaked our T-Shirts in a stream to make the heat more bearable, and Guy invented the “ice cap”, which is a cap full of cold water that is then slapped on Freddie’s head. 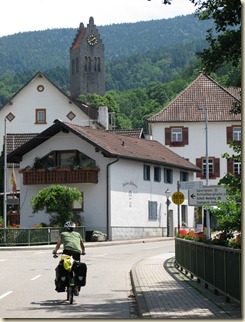 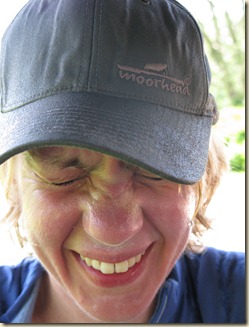 We camped in Herrenwies, up in the Black Forest. The next day we had a beautiful ride through thick forest, which was mostly downhill apart from one 400m climb. The temperature was much cooler, with a few showers. We camped in Nagold on the Eastern edge of the Black Forest, and then next morning it took us a good half hour to get out of the small town, as the only way out was through a busy tunnel, which was only for cars and closed to cyclists and pedestrians. With the help of some locals we found a way across, which involved cycling up on a hill high above the town, and then descending again, just to get over the tunnel.

We had a short day of 30km and arrived in Ehningen near Stuttgart mid-morning. Ehningen is where our good friends Sandra and Alex live, so we visited them and their children, Laura and Phillip. Laura is one and a half, and Phillip only 7 weeks old. We spent the afternoon catching up and going out for ice cream, and Sandra and Alex fed us hungry cyclists with a yummy barbeque and then put us up in a fancy local hotel. Needless to say we slept very well, and after a shared breakfast we were on our way again. 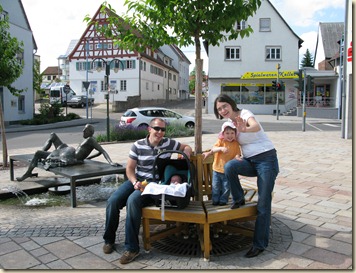 In the UK and France, we are used to cycling on the roads, but in Germany there are many cycle paths. When you cycle on the road and cars toot at you, it normally means there is a cycle path somewhere parallel, which you can’t necessarily see from the road, but which you should try to find as the drivers don’t expect to see cyclist on “their” road. Sometimes the cycle paths are great, but often they are more designed for local travel and you have to stop and start a lot to find the next section, which is often not signposted.

When we crossed the Swabian Alb to get to Ulm, we found out the hard way that sometimes what looks like a cycle path is not a cycle path at all. We had a 300m climb ahead of us and, coming out of Bad Urach, we took the “cycle path” to the right of the main road. We started to climb, going past residential houses, but after a while it started to look more like a dead-end road than like a cycle path. Enquiring with some locals revealed that there seemed to be a path through the forest to the next town, but this was not recommended as it would be very muddy. There was also a steep path going up to the main road. We somehow managed to miss the path going up to the main road and went into the forest. Knowing this was not the right way, we were still too stubborn to turn back as we had already cycled quite a few kilometres uphill and didn’t want to go down again. At first we were on a 4WD track, which was a little muddy but otherwise fine. Then it turned into a hiking path. It was still ok. Then the path became completely overgrown. It obviously hadn’t been used for years. We could still hear the main road above and to the left, so we pushed on hoping there would be a way through. We had to take some of our panniers off the bikes now and shuttle them over a particularly slippery section, pushing the bikes up the hill and through the overgrowth. After two hours, and having covered only 2km with a 300m vertical climb, we finally found the way back to the main road. We have never been so happy to see tarmac! 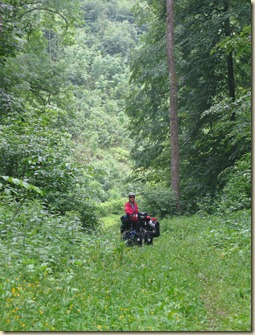 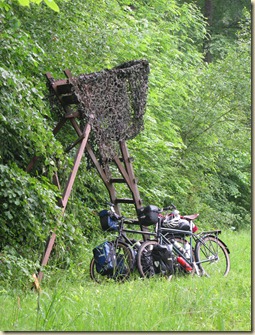 The next morning, a lady at our campsite donated a pack of chocolate cookies to us, and we powered it all the way downhill to Ulm, where we were meeting our good friend Gudrun at 2pm in front of the Ulm Minster. The Minster was very impressive, featuring the highest church tower in the world and having taken 500 years to build. Gudrun had driven to Ulm from Bregenz in Austria, as we hadn’t seen each other for 7 years while she was living in California. She was returning to the US the next morning, and we spent the afternoon at a café in the city centre to catch up and make plans for the future. 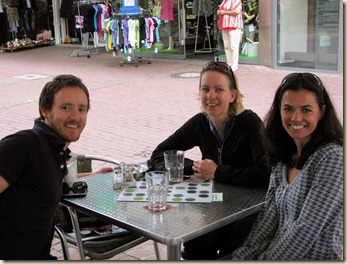 The other reason we were excited to reach Ulm is that we are joining the Danube cycle path here. This cycle path is very popular in Europe, and leads all the way from the source of the Danube in Donaueschingen (Germany) to the Black Sea for over 2,800km. We will be following the Danube through Austria, Slovakia, Hungary, Croatia, Serbia, Romania and Bulgaria. But first we are taking one or two days off in Ulm to celebrate Guy’s birthday.