There it was again, that unmistakeable sensation of floating on water. My heart sunk, I knew it was serious and we had to act swiftly; “Freddie get up, the water has come in, we need to get out of here fast”. Freddie sat bolt upright in the tent, my torch light glaring in her face revealing a look of confusion and disbelief.

It was our eighth day in a row of rain. Riding into Donauwörth we were desperate to find camp quickly and settle into Boris, our tent, with the hope that tomorrow would be a better day. Particularly as we had just spent the afternoon in various police stations and town halls trying to retrieve our lost wallet and the €300 that were contained within it (we had managed to cycle off after a supermarket stop, leaving the wallet on the rear pannier of one of our bikes). We arrived at the “official camp site” of the city which turned out to be a patch of grass in front of the Canoe Club right beside the Danube river.

Freddie went inside to enquire about camping logistics. A canoe club party was in full swing, and all of the elderly participants looked worse for wear. It seemed that they were taking turns looking after the campsite, and today it was the turn of a red-faced man who seemed slightly drunk and not exactly a professional campsite manager.

The man was quick to advise of a dry area that would be perfect for a nights stay, and guaranteed to keep our tent dry, indicating towards an open basement under the stilt section of the club house. Immediately the alarm bells rang as there was a mere metre in elevation between the river and the proposed pitch. We raised concerns about the recent amount of rain and the slightly swollen river, only to be dismissed with a laugh: “Flooding, no – not a chance anything will happen tonight.” 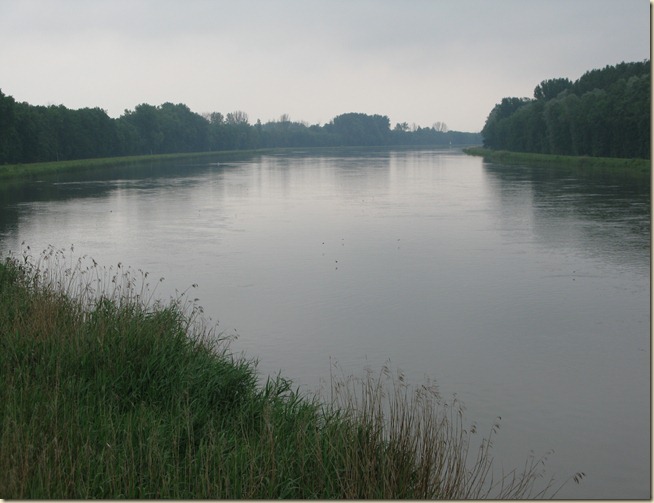 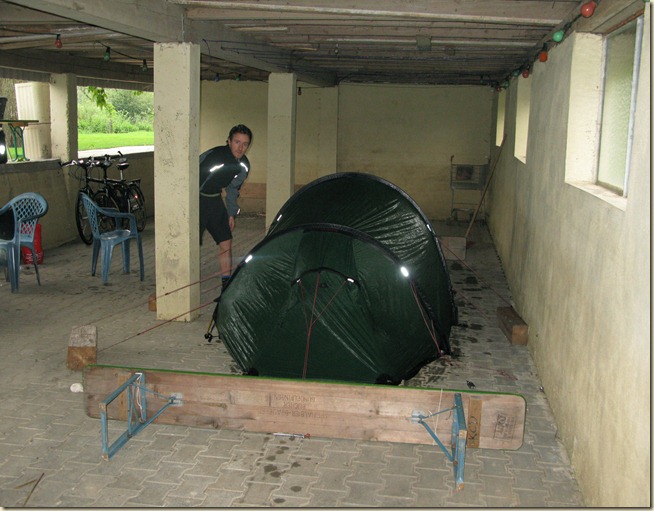 We attempted to justify the decision to stay as we were tired, hungry and wet, this was an offer of a “dry bed”, seemingly too good to refuse. With some lingering doubts, we set up camp, trying to reassure ourselves, “they wouldn’t let us stay if there was any risk”, and “they know the area better than us”.

In the evening the swirling and gurgling sound of the river grew a little stronger. But we were now settled and it wasn’t raining, so we felt fairly confident it would be ok. Even if the water level did continue to rise at the current rate it would take well into the next day to reach our camp. We crawled into our tent, pulled the zipper and attempted to find some sleep. The canoe club crowd had gone home, so we were on our own, being the only guests at the campsite.

I got up a few hours after bedding down for a quick recon. The river was still swollen, a little higher but not threatening, I went back to bed, confident that all would be fine. I soon feel into a deeper sleep. At some point Freddie rolled over onto her side. There was a very subtle sensation of my sleeping mat rising ever so slightly. In my subconscious state I was confused as to why I had never noticed such a sensation before, but I soon dismissed it as a mere hallucination.

I’m not sure how much time had passed but the next time Freddie rolled over there it was again, a distinct feeling of being on a water bed, of moving water under the tent. I slapped my hand on the tent floor. How much water was beneath us? Why weren’t we wet? Were we floating on the Danube? Panic set in, I called to Freddie in a voice that was struggling for calm but laden with fear.
Freddie stared at me for a few seconds before the seriousness of the situation kicked in.

Opening the outer fly revealed our valuables floating around us like a holy procession on the river Ganges. Crap.., the laptop, the camera, our passports! We scrambled and grabbed our belongings, dumping them on the highest driest land we could find. We splashed about in our best briefs, wading through water up to our shins. 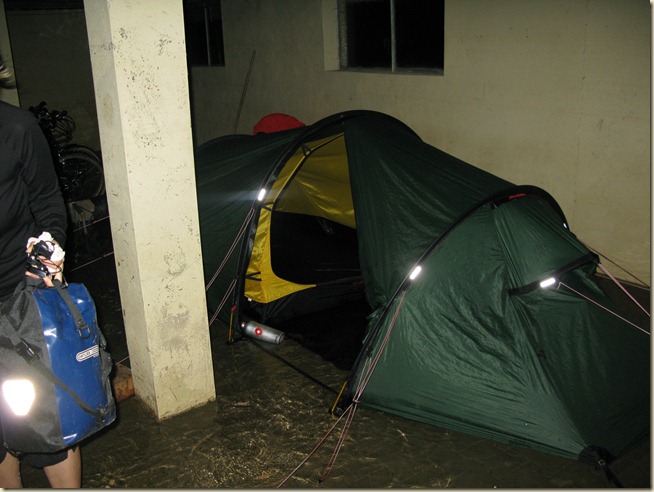 Luckily our decision to buy Ortlieb’s waterproof panniers had saved the day and all our valuables were safe and dry, only a few clothes were wet. Once we had all our possessions on high land we evaluated the scene. The river, though much higher had not yet reached our campsite. We soon discovered a faulty water outlet valve in the basement was responsible for letting the water in. 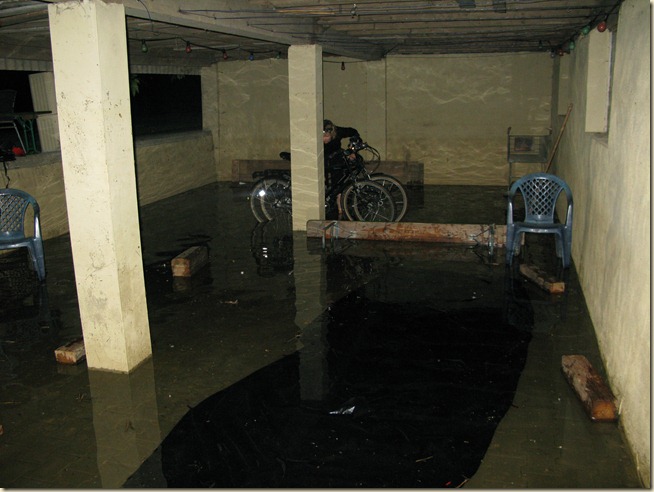 It was 3am in the morning. We packed up with the water closing in around us, and cycled 70km to our next destination, Ingolstadt, laughing with relief that we were ok and seriously re-assessing our campsite selection process.||