Our first week in Eastern Europe

After recovering from the bed bugs, we were keen to go explore Bratislava.  We had hooked up with a “free” walking tour of Bratislava which was run by a young Aussie who gave an interesting insight into its rich history and was keen to take us outside of the old town and talk about some of the darker days that other tours tend to avoid.

The cafe culture was certainly alive and swinging with a temptation around every corner of the old city. We found a nice terraced cafe overlooking the town square watching street artists entertain the tourists and Bratislavians alike. 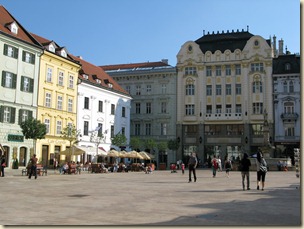 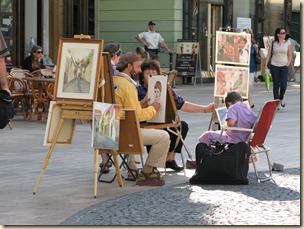 The old castle high on the ridge was a great place to look back over the old town perched on the Danube and across river lay ugly soviet style apartment blocks as a reminder of the communist days. The castle which stood the test of time repelling almost all invading armies was finally conquered by Napoleon after two years of continual assault.

The start of our journey into Eastern Europe was a real transition; the roads are dotted with potholes, familiar brands have disappeared apart from Tesco supermarket (some things just won’t leave you alone) and even Freddie has run out of languages to speak. During our first few days in Hungary we cycled through agricultural areas, and even within the villages there are fields of wheat or corn between the houses. There is still a surprising number of cycle lanes, although our fellow cyclists are mainly old men with moustaches and slippers. Many buildings are ugly communist blocks, but there is also a lot of new development going on. 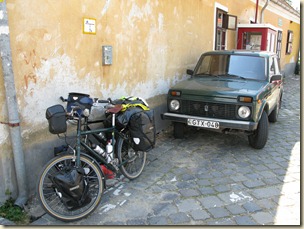 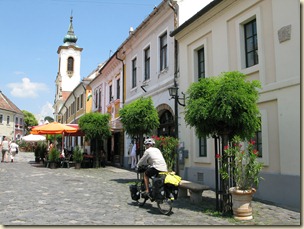 On our first evening in Hungary we arrived at the campsite in Györ, which was already full. The only thing the owner could offer us was a caravan for the same price as a tent pitch. Of course we accepted and stayed in a caravan with a little garden for the night. The next two campsites we stayed at had swimming pools, which was great as the weather has been very hot recently, up to 36C in the shade. We are trying to leave a little earlier in the mornings, but we do take a bit of time packing up our tent, having breakfast etc, and so we never manage to leave before 8:30am and end up cycling in the heat of the day most of the time. 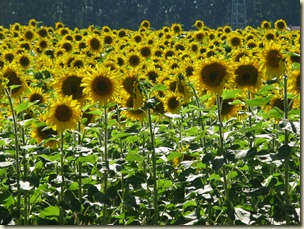 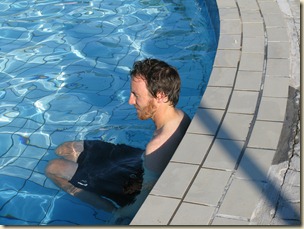 Last Sunday, there was a cycle race in the area we were going through, and as we rested in a small village, there were already a couple of cyclists sitting on a bench in the shade. We started talking in German, and they were very interested in our trip. They had come from Budapest to watch the cycle race. Both were 70 years of age, but very fit, and they had taken part in the race in the past, and the lady had even won it several times. The man showed Freddie a small church, and told her that his favourite restaurant is in this village. “Please, come with us, I would like to show you the restaurant”, he said. “You are my guests. Shall we go now?” Cyclists never say no to an invitation for food, and so we went to the restaurant. It was actually a Bavarian beer hall, as there have been Germans in the village for hundreds of years (Danube Swabians). We had soup and pancakes, and afterwards we were on our way, strengthened and grateful. 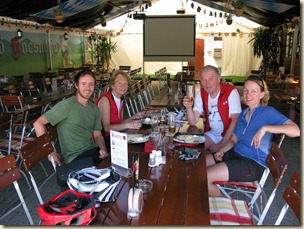 In Budapest, we booked a centrally located apartment for three nights. As we booked it online, last minute, we managed to get it for a lower price than what we normally pay for a room in a hostel. It had two bedrooms, a kitchen, dining area, washing machine, balcony etc. We never found out what the catch was.

Once settled in, we gave Tony a call. Tony was an Australian contact through Guy’s dad, and he met us near our apartment an hour later. “I’ve got a taxi waiting, it’s too hot to walk. Let’s go up to the castle district.” A little while later, we reached the castle area, perched on a hill above the city. We enjoyed the views of the stunning parliament building and wandered around the castle and church for a while, but then it was time for the next activity, which Tony had already arranged for us. We met up with Tony’s friend Andras, who is a Hungarian historian. 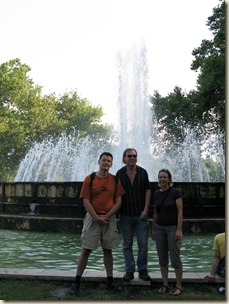 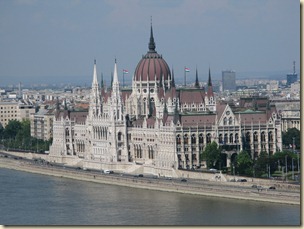 Together, we visited the Hospital in the Rocks, which is part of an amazing 10km labyrinth beneath the castle area. It was used as a bomb-proof hospital in the World War II, next to the headquarters of the Hungarian military, which were also in the labyrinth. In the Cold War, it was redesigned as a nuclear-proof hospital with an area where victims of a nuclear strike could be cared for. The weirdest thing was that, even though the hospital has not been used since the 50s, a housekeeper and his wife kept the hospital fully operational until 2004. The hospital was secret during this whole time, and for 40 years they had to change the bedsheets every 2 weeks on hundreds of beds, as well as preparing clothes for the patients, disinfecting all equipment and maintaining the generator and other medical equipment.

There was also another labyrinth nearby, which is now some sort of art installation. Luckily Tony knew of a secret access door, so we sneaked in without paying. After an ice cream or two, we wandered across Margaret island, which is in the river in the middle of Budapest. It has lovely parkland and a musical fountain, which could provide entertainment for hours.

We said goodbye to Andras for the day, but carried on with Tony to walk through the city centre, which is a real mix of grey, rundown areas and beautifully restored, turn-of-the-century buildings. Tucked in the courtyards of some of the buildings are very cool garden bars, quite colourful and sometimes only temporary constructions. One of them had a great collection of totally random furniture. We ended up sitting in a sofa carved out of a bathtub. Exploring the large building, we walked up to the attic and happened upon a bike workshop, which is open twice a week and where people can come to work on their bikes or get help with fixing bike problems.

After dinner in a nice outdoor restaurant, we called it a day, but arranged to meet up again the next day. When we arrived, Tony suggested catching a bus tour which we had noticed the day before. We had noticed it because the bus was “swimming” in the Danube like a boat. It was an amphibious bus, apparently the first on the continent, and our hearts did miss a beat when it drove into the river.

We then met up with Andras and spent the rest of the afternoon at the Szechenyi thermal baths. This is a legendary complex of about 15 different pools, saunas and steam rooms, which was built over 100 years ago. The building itself is amazingly beautiful, and we felt quite relaxed and refreshed afterwards. 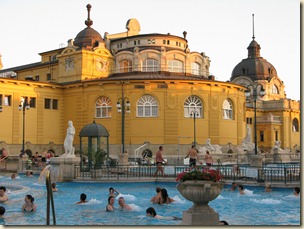 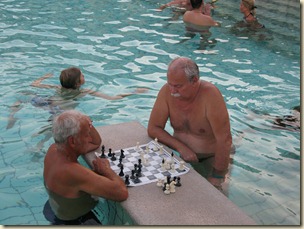 Saying goodbye to Tony and Andras was a little sad, as they felt like old friends after only two days. They have given up a lot of their time to give us a unique insight into their city, and we will always remember their generosity.

Leaving Budapest, we were in for a surprise. We turned off into one of many small paths off the main road to have our lunch breaks, and noticed another cyclist had already chosen the same spot. We quickly realised that we already knew each other! We had met Di back in London in March, at a pub gathering for bike tourers arranged by Alastair Humphreys. She had left London a week before us. We teamed up and cycled together towards the campsite.

Unfortunately it turned out that the campsite only existed on our map. According to the tourist information center, our only option was Aqualand, a fancy outside swimming pool and spa where we could camp. As we were debating what to do, along came a French couple on recumbent bikes with three small kids in trailers. They were on their way to Hanoi and suggested a wild camping spot near a beach not to far away. We joined them and cycled to the beach in convoy. Unfortunately the beach turned out to be packed with people, and the people we asked about camping were very unfriendly. The French couple stayed anyway, but we decided to move on.

A few kilometres down the road we pulled into a small area with river houses. There was a perfect patch of grass, a rarity as the area was very populated. We asked the occupiers of the nearby holiday house, and a friendly young guy told us the grass patch didn’t belong to anyone, so we could camp there. We set up the tents and jumped into the Danube for a much needed bath. We were also nearly eaten up by the mosquitoes, which have been making our camping life hell for the last month or so, coming out in the hundreds on dusk. All you can do is jump in the tent and hope you don’t have to get up during the night. 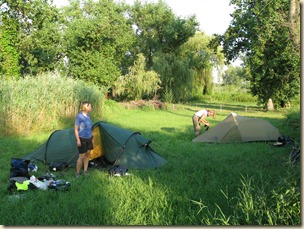 The following day, we cycled onwards, together with Di, who is also on her way to Istanbul, though on a slightly different route. Flat farmland accompanied us all day, and again the campsite in our guidebook didn’t turn out to exists. Luckily, we decided to ask at a nearby riverside restaurant, and they let us camp for free, if we consume something at their establishment. This was the perfect excuse to have dinner out, and so we had some lovely Danube fish, enjoying the sunset until the mosquitoes chased us into the tent. Unfortunately there were no showers, so we bathed in the Danube again. Next we are crossing into Croatia for a couple of days before we head to Serbia. 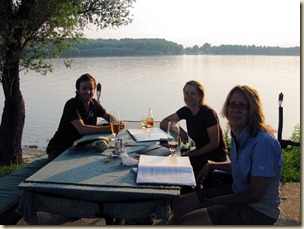 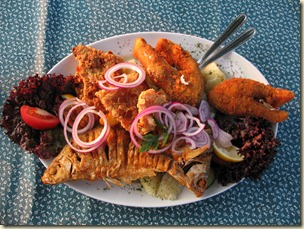