According to our guide book when you arrive in Coober Pedy “you might think you’ve arrived in a post-apocalyptic shithole.” A little harsh perhaps but there is no doubt it is a unique setting packed full of interesting people with only one thing on their mind: Opal.||

With 80% of its residents living in underground dugout homes to escape the heat, and mining equipment littering its dusty streets, Coober Pedy certainly felt a little surreal. Opal fever has seen fortune seekers come from 44 different countries for the past 100 years so it actually feels quite cosmopolitan.

It all started in 1915 when 14 year old Willie Hutchison disobeyed the strict orders of his father, James Hutchison, the leader of a gold prospecting expedition. The party had run out of water amidst the worst draught South Australia had ever experienced. While the adults went in search of a water source, young Willie had been left in charge of tending the campfire. His father quickly forgave him his disobedience when, on his return, Willie had found not only a bag full of loose opals, but also a water hole in the vicinity.

Thanks to Willie, miners have been flooding to Coober Pedy ever since, staking their claims, digging and blasting shafts in the sandstone hoping to uncover their fortune. So how much does the average miner make? A local summed it up nicely: 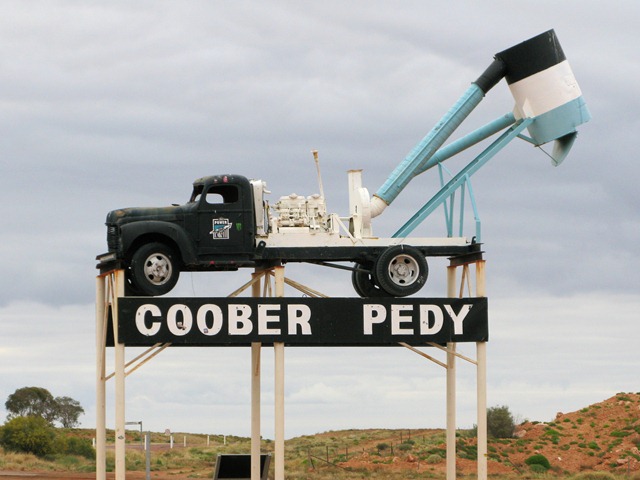 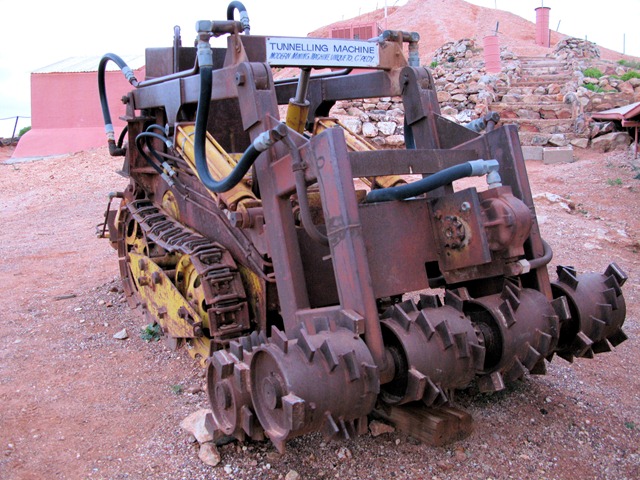 As the town is located in an unforgiving environment, much effort is required to provide power and water for its inhabitant as well as for visiting tourists. The town water comes from an artesian bore and has to be desalinated and filtered to make it drinkable. A diesel generator provides power for the town, making electricity quite expensive.

There is plenty to explore and we really enjoyed the Old Timers mine, a mine that was rediscovered when a dugout home was being built. It was subsequently turned into a tourist attraction and during the process they found over $100,000 worth of opal that the original miners had missed by just a few feet. 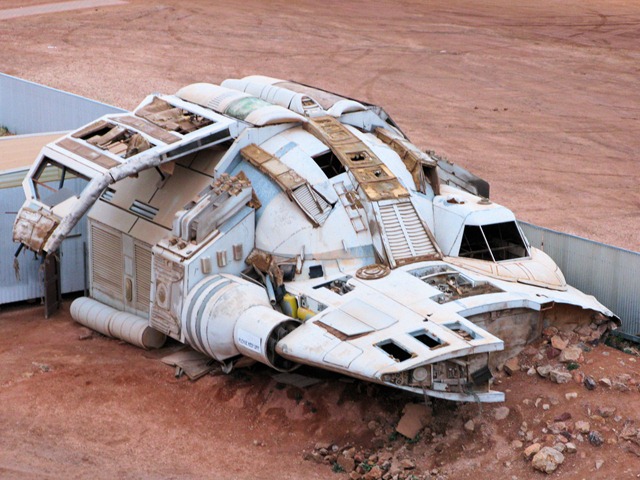 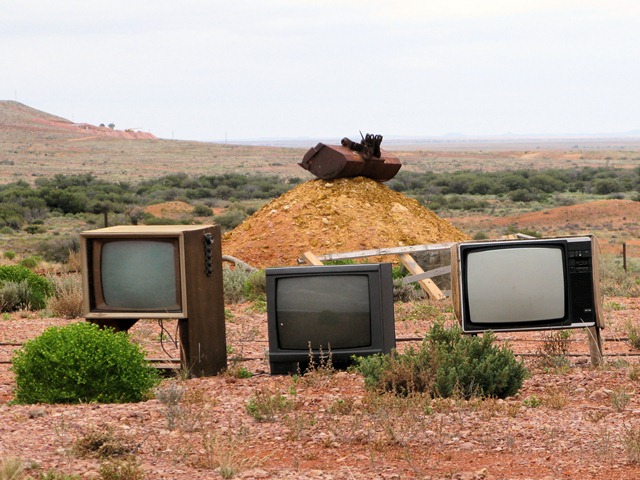 The town is littered with unusual artefacts, walking around your never really know what you might stumble across, hopefully not a shaft! Outside a hotel we came across a spaceship that seemed to have crashlanded just meters from the entrance. It turned out to be an old movie prop from the film Pitch Black. At the entrance of a mine we found old TV sets carefully placed as if they were regularly used.

During the three days we spent in Coober Pedy it did not stop raining, converting the usually sunparched and dusty streets into a muddy sludge. 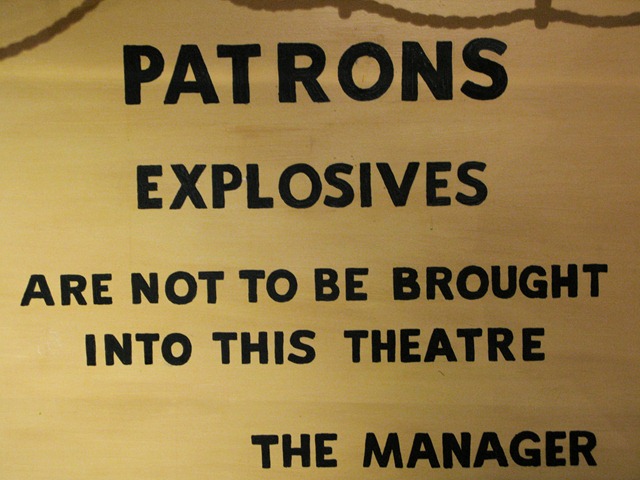 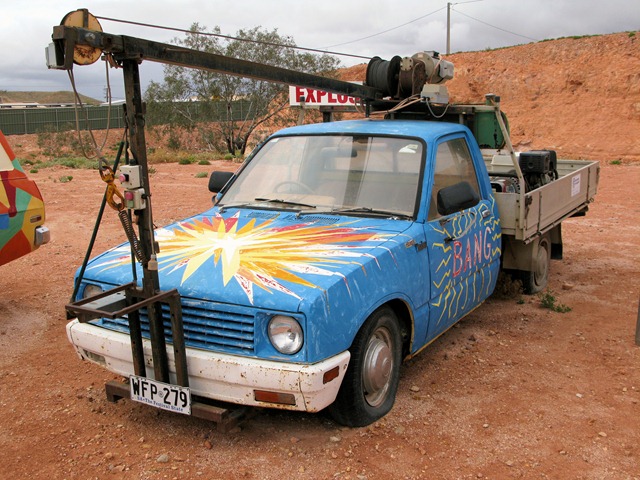 Leaving Coober Pedy was a little daunting as we had the longest stretch of “nothingness” on our entire trip to cover: 260km without a single human dwelling. Luckily we had found out from fellow campers that there were two water tanks on this stretch, reducing our need to carry large amounts of water.

Trees do not grow naturally in the Coober Pedy area, and the landscape was quite devoid of features. When looking closely however, we still found stunning wild flowers covering the land, grateful for the recent rains. 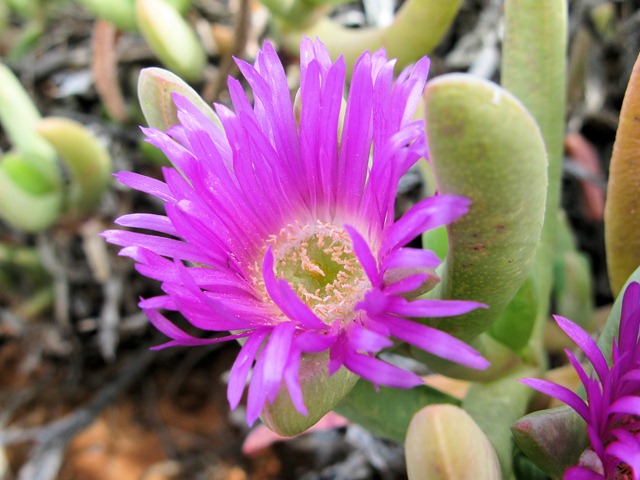 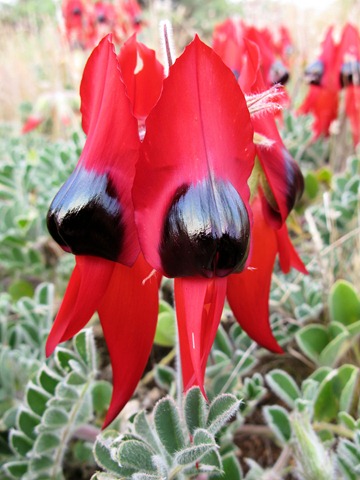 We were now cyling trough the Woomera Military Exclusion Zone, which meant no deviating off the road was allowed. With the prohibited area being nearly the size of England, it took us several days to cross it.

Arriving at the first water tank one of our worst fears came true; it was empty. Luckily there was a small tank for hand washing near the toilets so over the course of half an hour we managed to drain out just enough to get by. The water tanks in South Australia are fed by rainwater running off the roofs of picnic areas, making the water supply less reliable and more likely to be contaminated than the tanks in the Northern Territory. As a result we have started filtering our water again.

On our second night out of Coober Pedy, as we wheeled the bikes into the bush for another wild camp we realised we had just walked through a field of thorns. On closer inspection we discovered dozens of spiky thorns embedded into our tyres. We spent over an hour taking the little pricks out of our tyres and much of the next morning carrying our kit to the road and doing further checks. 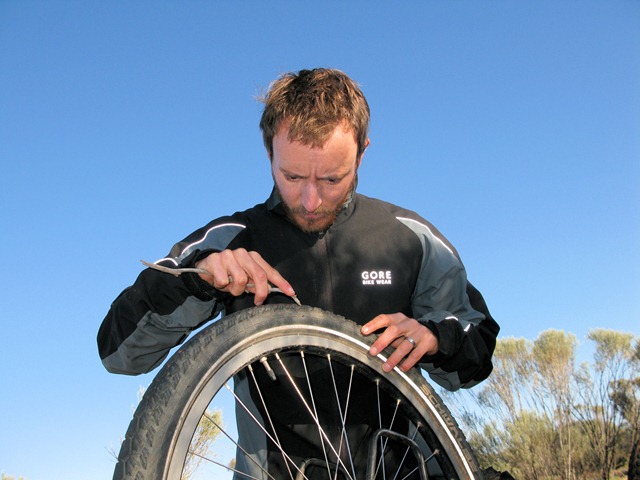 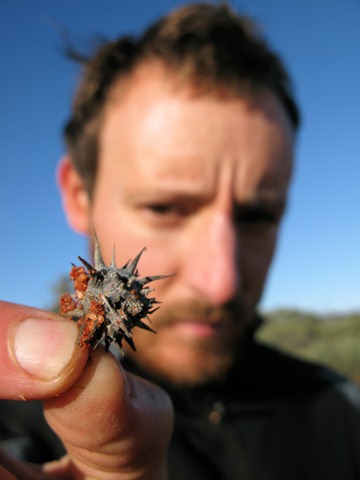 The continuous effort of cycling into the wind was taking its toll, and Guy suffered from bad knee pain, reducing his speed to a crawl. We barely managed 70km a day now as we were cycling so slowly, and even painkillers did not relieve his discomfort.

At camp, we had seen some emu footprints. We hadn’t seen any wild emus yet and were just contemplating the fact that emus were extremely shy animals when we spotted a group of three adults with about a dozen baby emus in a field near Glendambo, the first roadhouse after Coober Pedy. The emu is the second-largest bird in the world after the ostrich, and over the coming days we saw quite a few of them. Despite their size, they usually took flight as soon as they spotted us. 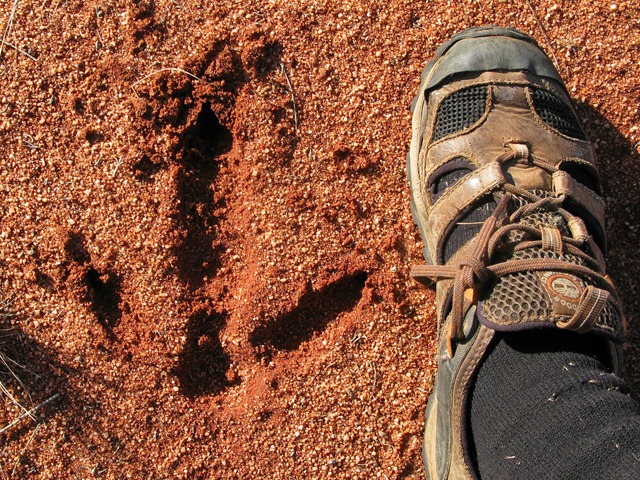 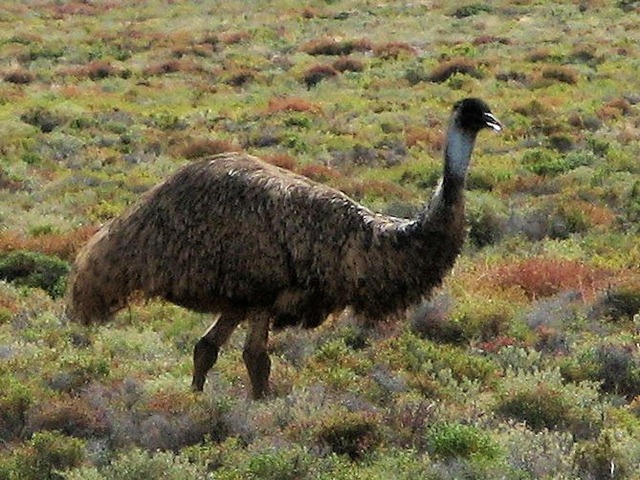 After three days of pure outback, we felt like we had arrived back in civilisation when we pulled into Glendambo roadhouse. It was quite exciting to see a human dwelling again, even though it was just a humble fuel station and motel.

When we left Glendambo in the morning, we could see a road train in our rear view mirrors. Oddly, it was flashing its lights and pulling over just behind us. We soon realised it was our buddy, Craig. We had met him a week earlier at a roadhouse. He was interested to know more about our ride and perhaps check on our mental health. We refused to accept his offer of donating his lunch to us (yum, lasagne!) but accepted some spring water which was a step up from our salty bore water.

Guy’s knee pain was no better and we were pretty relieved when we finally reached Lake Hart right on sunset. This is usually a dried out salt lake, but thanks to the recent rains it had water in it and was amazingly beautiful. 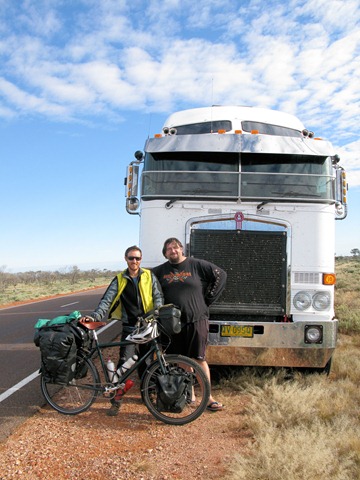 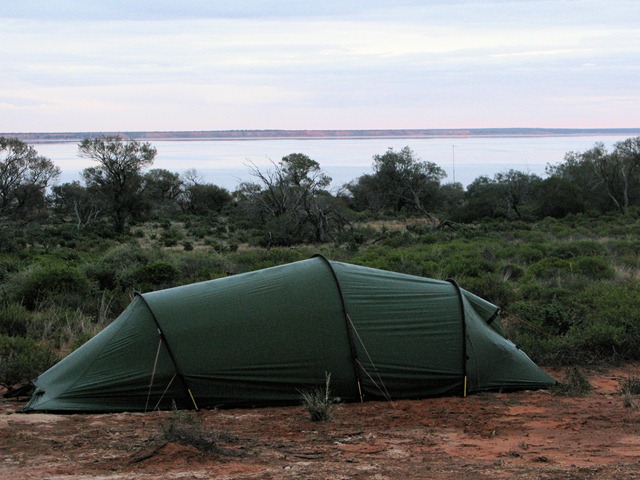 The following morning we passed one of the biggest salt lakes in the state often used by speed enthusiasts intent on breaking their necks and/or land speed records. Much of central Australia used to be covered by a vast inland sea, which is much easier to imagine once you have seen these huge salt lakes. 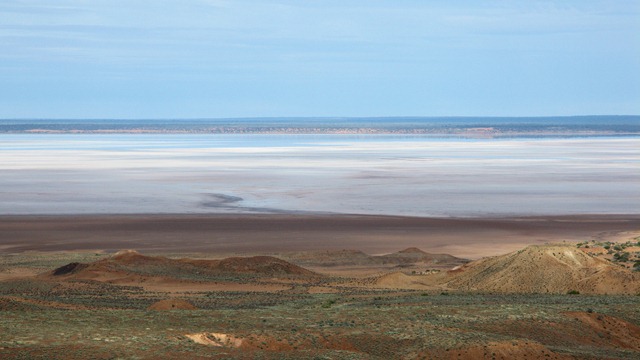 Five days after leaving Coober Pedy, we arrived in the settlement of Woomera. This village had been established in 1947 to support the Woomera Rocket Range. After WW2, the British had been looking for a place to test new weapons, rockets and missiles. The Woomera region had been chosen and was used for decades by British, Australian and American forces to experiment with top secret military equipment. The visitors center has a great exhibit detailing the role of Woomera´s past and present but it was disappointing that there was no mention of the devastating nuclear tests that occured in the late 1950´s, contaminating the local aboriginal communities and inflicting great suffering on the servicemen working in the area completly unprotected.

The village of Woomera itself had been off-limits to the public until 1982. It is still used by the military and is an oddly artificial place with a campsite, a supermarket and a couple of museums. We took a day off here to let Guy’s knee recover. 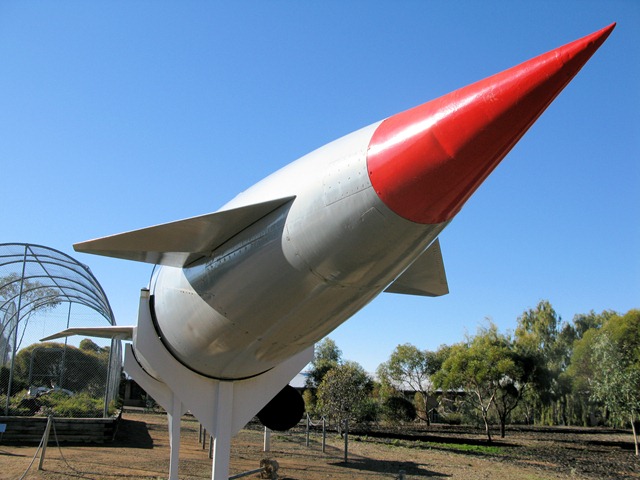 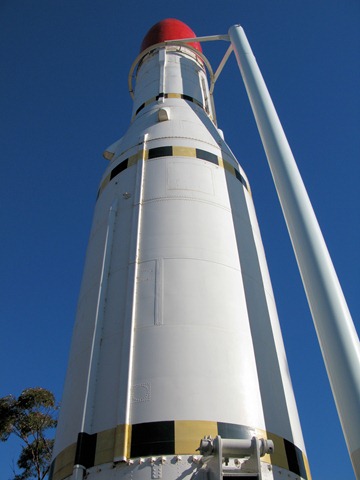 The road south of Woomera was very busy with lots of road trains and school holiday traffic. The amount of roadkill on this stretch was the worst we have ever encountered: every hundred metres or so the stench of a dead kangaroo or a rotting cow filled the air and this made us think (rather morbidly) about our road kill list to date. We thought we might share it with you. Over the last 14 months we have seen dead horses, pigs, cows, camels, kangaroos, wallabies, snakes, sheep, foxes, mice, dingoes, dogs, frogs, cats, monitor lizards, hedge hogs, echidna and a dozen or so varieties of birds. Sometimes cycling is not for the faint-hearted!

On a more positive note, we were enjoying a lovely tailwind and beautiful sunshine and found another great camp spot on our last night in the Outback. There is something about camping out here that makes you feel really connected with nature. Sitting around a cosy fire under a million stars was a natural part of our ancestor’s life but is such a rare experience nowadays. 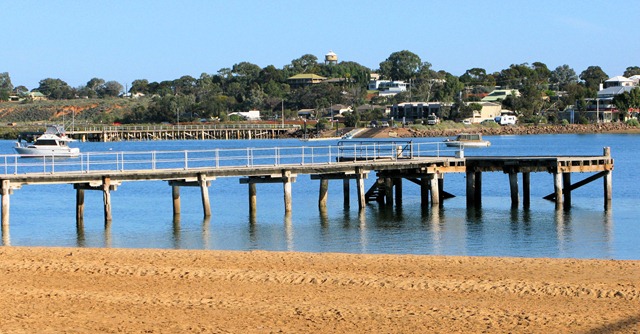 Finally after 3,600km of riding we arrived at the sea (the top of the Spencer Gulf), officially marking the end of our time in the Outback. In only one week’s time we would be in Adelaide, staying with our friends Paul and Jenny, and boy were we looking forward to some creature comforts.