On our last night in Hungary we got a recommendation for a campsite from a group of Hungarian cyclists we met whilst sheltering from the sweltering 38 degree heat. Upon arriving at camp we were no sooner unpacking out tent when we were visited by a little four legged friend who took great pleasure in lying on our ground sheet whilst we were trying to set up Boris.||We soon discovered his weakness for a good old belly rub 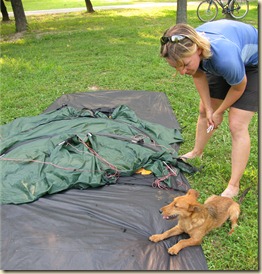 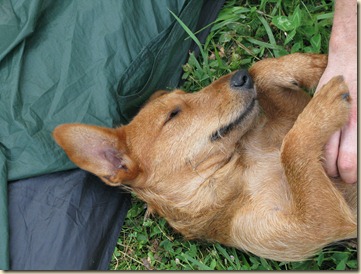 Cute, we thought but in reality his intentions were not as honest as first thought. Whilst we were distracted his two accomplices were accessing one of our food panniers, quietly burrowing their snouts in to detect any remaining food morsels. Fun and games carried on through the evening but the most entertaining was watching them run off with a fellow campers sandals, one sandal each, delight stretched over their little furry faces. 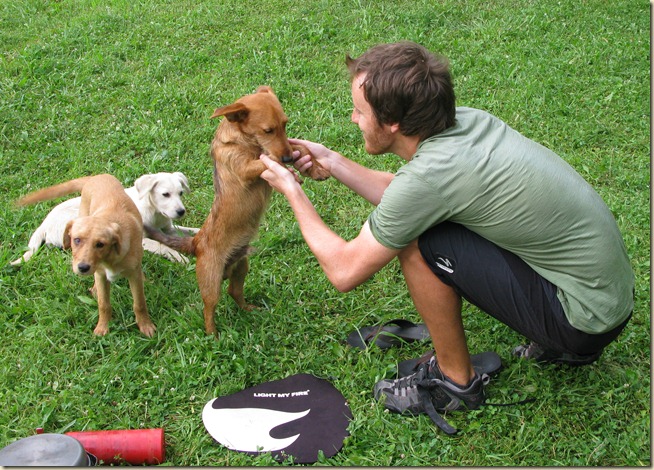 At camp we had just one fellow camper. A nice German chap with an impeccably organised camp. We later found out that he is from the same small town as Freddie in Northern Germany, Uetersen. Seeing our fellow Germans camp setup was somewhat shocking as we realised that order can be maintained during camp, unfortunately we are yet to reach such a standard. 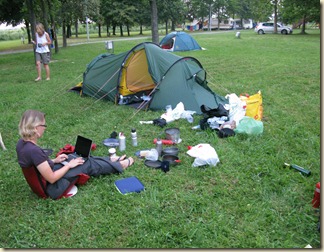 The following day we had a bit of a border crossing bonanza as we crossed from Hungary to Serbia then from Serbia to Croatia. Arriving at the border is always a little nerve racking as not be able to progress would mean much back tracking. Fortunately we were greeted with smiles and waved on.

After only 15km into Serbia we were already crossing into Croatia. Inside Croatia our first task was to find some Croatian cash. We managed to find an ATM but between the three of us we had no idea of the exchange rate so were unsure of how much cash to withdraw. In the end we based it on the price of a custard slice and figured 200 custard slices would be enough to survive on for two days.

Our one and only night in Croatia was at Vukovar, a town that has seen its share of blood shed from being bombed heavily in WW2 and then being virtually completely devastated during the Croatian War of Independence. It was sad to see that virtually every 5th building had some evidence of war.

The heavily damaged water tower remains (only just) as a memorial to the war. 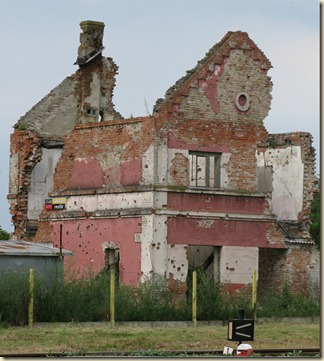 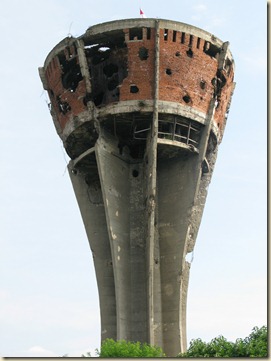 Unfortunately something we did not capture on camera was the friendliness of the towns people towards us, this was something that continued all through our short but memorable ride in Croatia.

The only problem we had in Vukovar was the lack of accommodation. The one hotel was too expensive so we asked the locals if they knew of any other options. Whilst I was doing this a German couple came up to Freddie in the street to chat. As it turned out they were rafting down the Danube all the way from source to sea over a six month period on a, wait for it….home made raft! It sounded pretty crazy so we soon fell into conversation. Hearing about our accommodation predicament they kindly offered us a pitch on their raft. Immediately the thought of a pitch so close to water brought back memories of flooding in Donauwoerth, but unfortunately curiosity got the better of us and anyway how many times can you sleep on a raft? They led us down to the harbour where the raft was moored and from first glance you could tell it was built by a skilled craftsmen.

Marek is a carpenter by trade and a very talented one at that judging by the handicraft. Boris was unable to fit on the front deck of the raft so we had to pitch him on the mariner next to the raft.

We weren’t totally sure if the pitch was legal, well we knew it probably wasn’t so when a police boat entered the harbour our hearts dropped. The officer on the front deck took one look at us then smiled and waved. 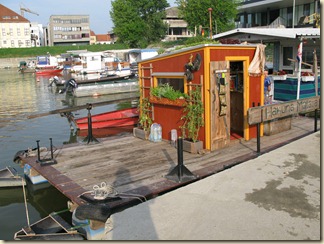 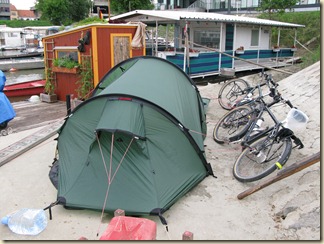 Back on the raft Louise and Marek had whipped up a lovely meal. 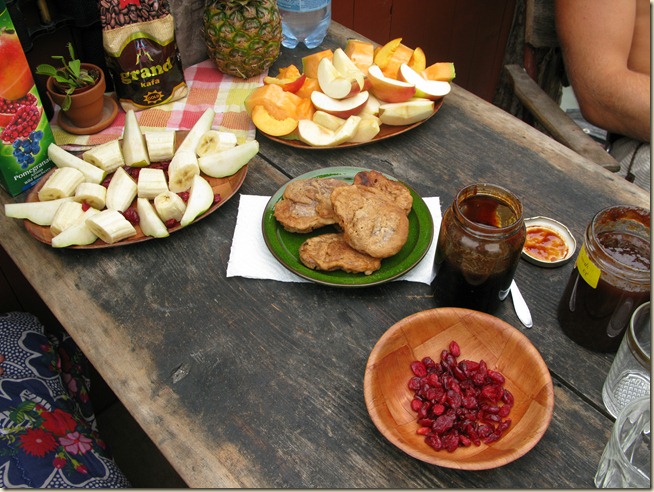 Despite the pending thunder storm we had a terrific night sleep and will always remember the kindness of Louise and Marek whose adventurous spirit and “no worries” attitude was very inspiring. 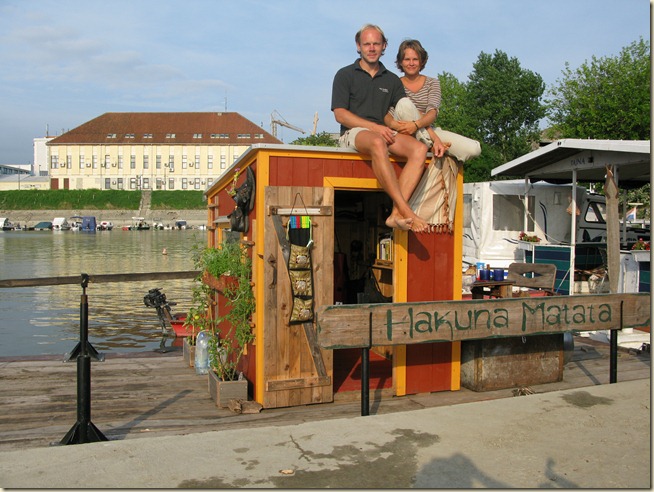 The following day we already crossed back into Serbia to stay in Novi Sad (Serbia’s second largest city) for a couple of nights. Serbia felt poorer than Croatia, with more litter on the side of the road and feral dogs roaming some of the streets. People were very friendly though, and we had many toots and waves, as well as some people slowing down in their cars next to us to chat and ask us where we are going.

Monday night in Novi Sad felt like Saturday everywhere else, with busy cafes lining the streets, adults and children eating ice creams, young people getting ready for a night out, and a brass band playing on the town square.

We’re still riding with Di and will hopefully stay together until Istanbul. She is always chirpy and it’s sure is nice to have a change in conversation at times! We have certainly found our match when it comes to ice cream appreciation. 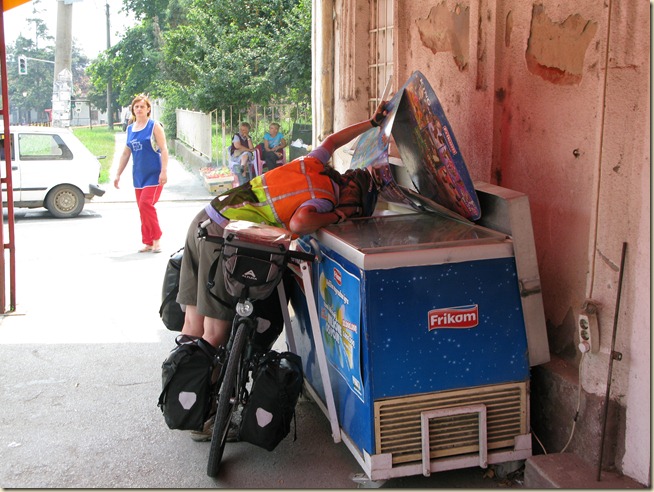 Her partner, John, has been our control centre back in the UK, Internet researching, arranging accommodation and mapping the best route through Bulgaria for us as our current maps soon run out.

After Novi Sad, we only cycled for a day before we arrived in bustling Belgrade for another rest day. During our stay we came across Vladimir, a local who works for the hostels in bringing backpackers to their establishments for a small commission. As we had already prebooked our hostel, he had no benefit in taking us there but showed us the way anyway. He had kind eyes and a lovely laugh, and just as he left we hastily decided that we should ask him if he would do a walking tour with us to show us the town. I ran after him and proposed the idea. He seemed delighted and and quickly stressed it would be cheap and we should not pay if we don’t enjoy it. Six hours later we had seen most of Belgrade’s important landmarks, ate at a local Serbian restaurant, ridden on countless buses and trams for free, and gone back to his home momentarily whilst he hung his washing out! 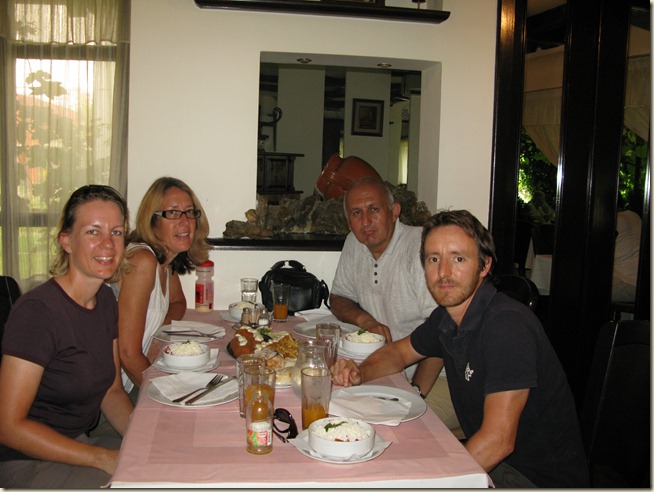 Vladimir had amazing knowledge of world politics as he was involved with the Liberal Democratic Party for seven years. He works very hard, meeting tourists at the train station at all hours of the day or night, and taking them to hostels or even to sleep in his tiny apartment. He has managed to squeeze up to 14 people into his living room at 2 Euros per person. He also looks after his dad who is ill and lives in a village near Belgrade. We had a fantastic time, though our feet did hurt a bit more than they should after a rest day! Belgrade has no major attractions, but it has an interesting history and a lively cafe and restaurant culture that was certainly worth visiting for a good few days. Vladimir showed us some of the government buildings hit by the US in 1999 by guided missiles, unfortunately they also hit a hospital. 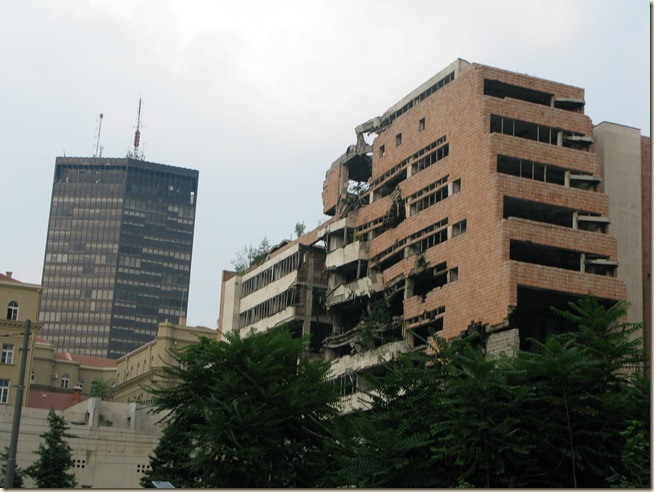 Leaving Belgrade in 40 degree heat, we wild camped in a corn field by the side of the road. It was a good little campsite, but the heat in the tent was immense, we were lying down with waves of sweat pouring off us, unfortunately unable to camp in the open air due to mosquitoes. 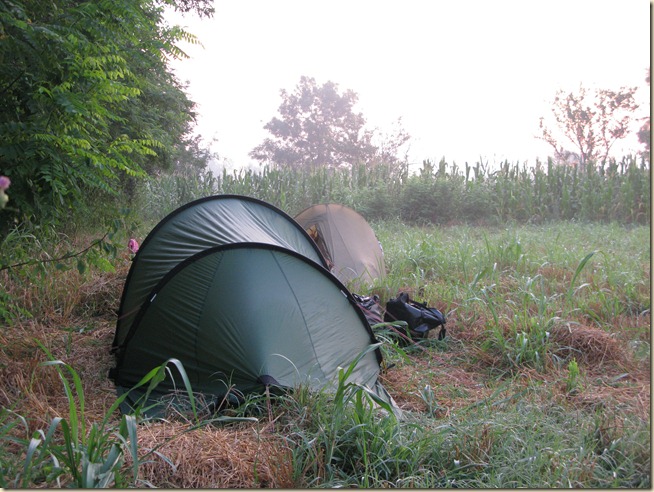 Luckily there was a campsite near Valiko Gradiste on the following day. It was located next to a swimming and fishing lake called the Silver Lake. Sheltering from a thunderstorm at a beach bar, we started chatting to Marco and his dad, Sasha, who own the campsite. They started buying us drinks and got the man at the bar to cook up some traditional Serbian sausage and barbequed bread for us. 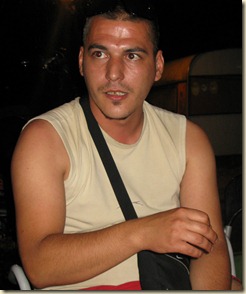 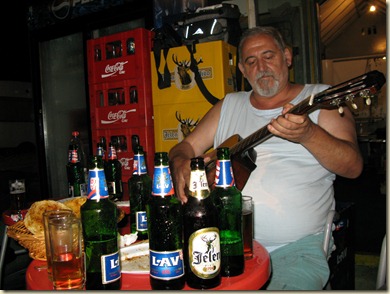 They refused any offer of us buying them a drink or paying for our food, saying we can do that when they come to visit us in our country. Marco kept saying what a pleasure it was for him to talk to us, and that guests in Serbia are treated with the highest respect. They offered for us to sleep in a caravan if our tents were too wet, and offered the next night at the campsite for free. We felt humbled and grateful that we were so well looked after. Unfortunately we did end up having to stay a little longer than planned as the Serbian sausage came back to haunt Di in the early hours of the morning! Stoically she soldiered on with a few naps en-route. 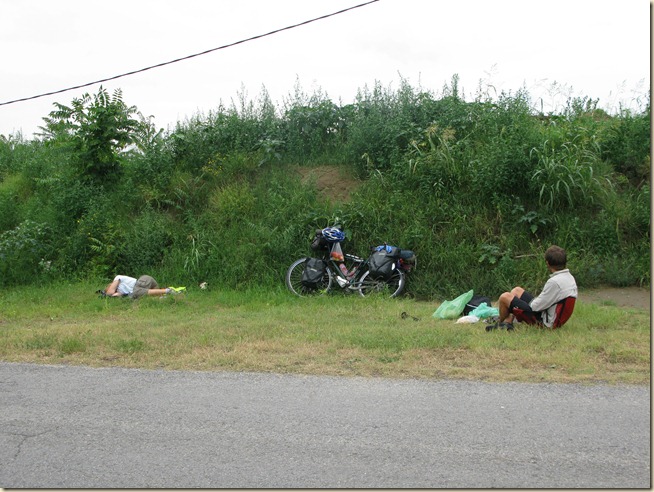 The ride from the lake took us along a stunning road the hugged the Danube and with the mountains of Romania rising up on the other side and the threatening storm clouds it was a thrilling sight. We happened to stumble across a camp site the offered a pitch right on the rivers edge. There is a little jetty on the left which looks perfect to launch in from for the morning swim. 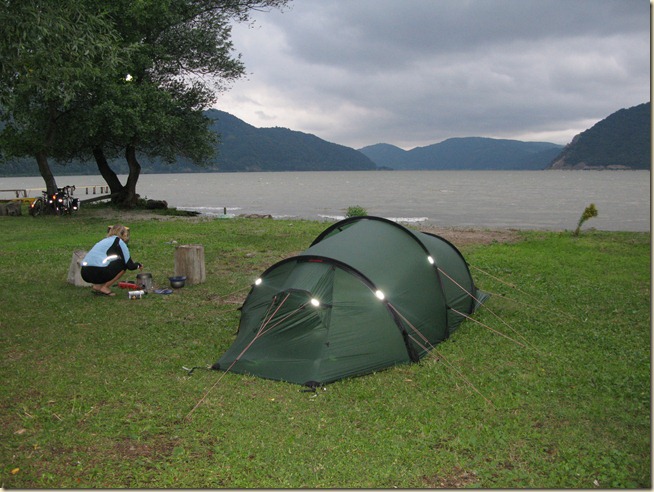 If all goes to plan we will will cross the Danube some 100km downstream and venture into Romania, the home of Count Dracula. ||