There are two options to travel from Alice Springs to Uluru, or “The Rock”: the most popular option is to stay on a tarmac road, then backtrack to the highway with an optional detour to Kings Canyon. The other option is to take the Mereenie Loop road. This is a more scenic 700km route to Uluru taking in Kings Canyon and minimising the amount of backtracking.

The catch is that the Mereenie Loop encompasses a 140km unsealed section known for its rough corrugations and sandy creek crossings, really just suitable for 4WD vehicles. This section lies in the midst of a 230km gap between water points, which would take us about 3 days of cycling to cover. As the Mereenie Loop is located on Aboriginal land, a permit is required to travel on the road, and camping is not allowed.

“You’ll need tyres ten times as thick as that. It’s sandy and you’ll probably have to walk a lot of it. You’d be lucky to do 20km per day.” – Grey Nomad, having just completed the Mereenie Loop in his 4WD

Taking into consideration all the pros and cons of the two roads, we made the sensible decision to stick to the tarmac. So we stocked up on food for the 5 days cycling we thought it might take us to get to Uluru, swapped our worn rear tires for new, slicker and thinner tyres suitable for the tarmac roads, and packed our bags. We were perfectly happy until we started chatting to a young German traveller who told us he had just driven the Mereenie Loop in a borrowed 2WD car and thought it would be doable by bicycle.

With the full intention of staying on the tarmac, we went to sleep.

8 hours later, Guy was woken up by Freddie whispering: “Guy, are you awake? I think we’re making a terrible mistake. What will we think later, say next year, when we look back and realise we took the easier option and missed out on Kings Canyon? Sure, the Mereenie Loop will be much harder, and maybe we won’t make it, but it’s so much more interesting. Shouldn’t we at least try?”

“Ok”, Guy mumbled and went back to sleep. With that, the decision was sealed. We were doing the Mereenie Loop.

We calculated that it would take us about 5 days to get to Kings Canyon via the Mereenie Loop, so we had enough food and set off from Alice Springs a few hours later to explore the West MacDonnell Ranges on our way. The terrain was quite hilly but very scenic, and we found a lovely camp spot in a dried out creek bed. 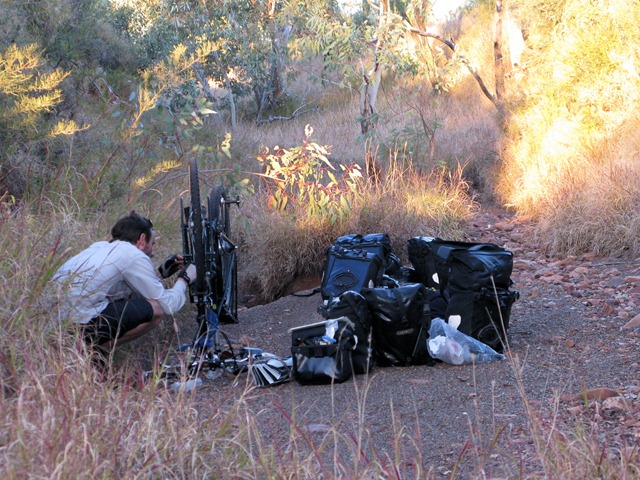 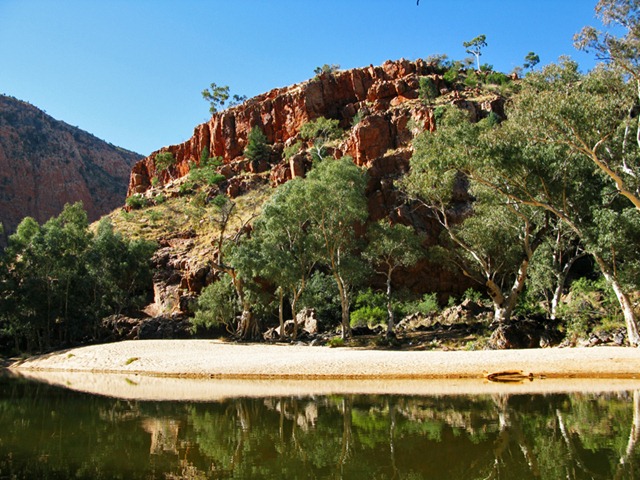 We hadn’t allowed time for many detours, but the one gorge in the West MacDonnells we really wanted to visit was Ormiston Gorge, which everybody we spoke to had recommended to us. It was indeed very pretty, though the campground wasn’t very exciting.

As Andrew and Therese had left on the same day as us and were taking the same route, we had seen them a couple of times on the way and met again at Ormiston Gorge. To give ourselves a better chance of completing the Mereenie Loop, we had asked them to do a water drop for us along the way. The only landmark on the whole 230km stretch without facilities was a turnoff to an Aboriginal village after 90km, so we agreed that they would drop the water off there for us, marking the spot by tying bits of toilet paper to a bush. 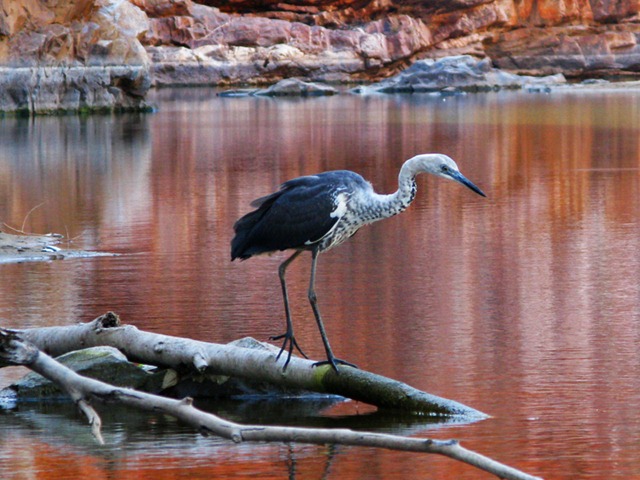 Our permits were easily obtained at Glen Helen for the princely sum of $3, although it would have been quite obvious to everyone that we were planning to break the “no camping” rules as there was no way we could cycle the whole Mereenie Loop in one day. This was the last water point where we filled up our bladders, though we would be able to top up our supplies from Andrew and Therese who were already setting up camp 20km on in Redbank Gorge. 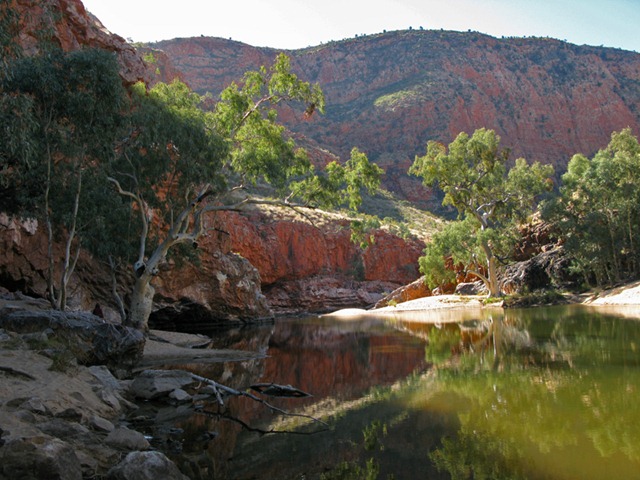 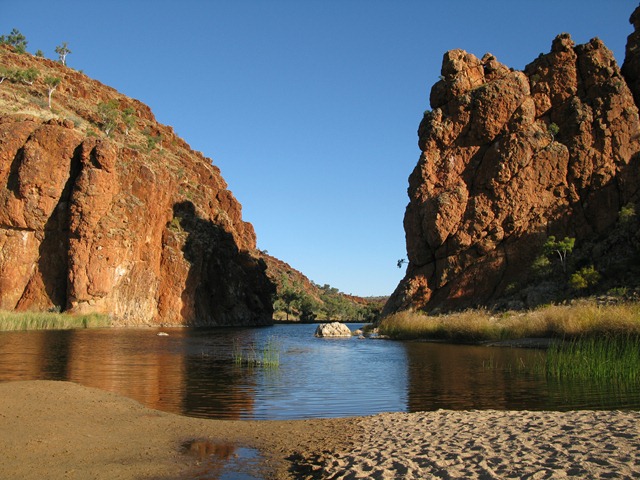 When we arrived at Redbank Gorge, Andrew and Therese had already lit a warming fire and were preparing a bucket shower with water heated by their car engine. To our delight, Therese even cooked us dinner (seafood pasta!) and made one last chocolate pudding. It was great to spend another night with our Kiwi friends.

In the morning, our tents were frozen. As we washed our dishes, the water on our cups and plates froze instantly, before we even had a chance to dry them. The Mereenie Loop road is located at over 800m altitude, making for warm days and freezing nights.

Knowing that we would hit the dirt road soon, Guy had swapped our rear tyres back over to our old tyres which were more worn but had much more grip than the new slick tyres. However, after barely an hour of cycling, Freddie’s rear tyre developed a large bulge. A while ago we had camped on recently burned ground and must have left the tyre on a hot patch so that it had developed a small but hardly noticeable bulge. Luckily we had reinforced it with duct tape as otherwise the tube would have blown right out of the tyre. As a result we had to change back a slick tyre, not ideal for the sandy dirt roads ahead of us. 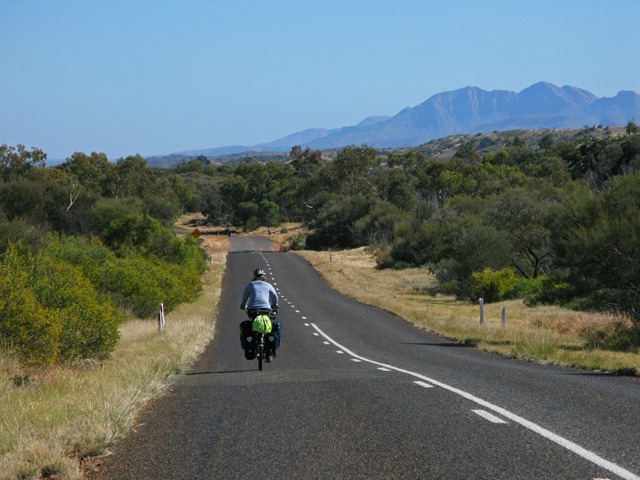 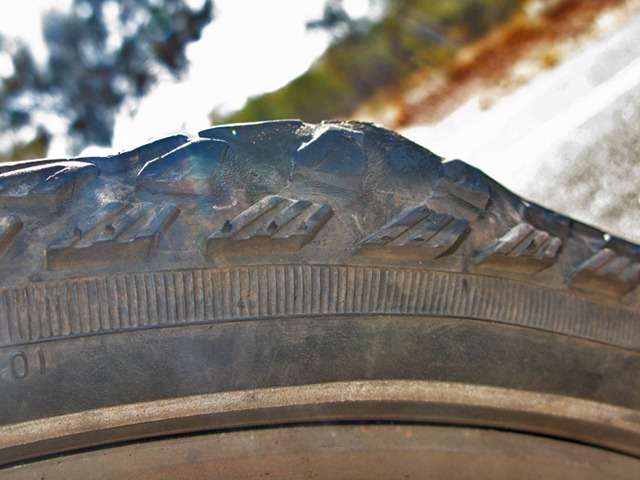 We were carrying 12l of water each, adding significantly to the load of our bikes. When the tarmac road ended, we deflated our tyres to 40PSI (we normally run them on 70PSI). Cycling on the dirt road was a shock to the system as handling the heavy bikes on corrugations, sand and rocks proved to be tricky at times. Most of the time we could find somewhere on the road to cycle, even if it meant cycling on the opposite lane, but it was slow going and we were glad when we reached our water drop as the daylight faded. 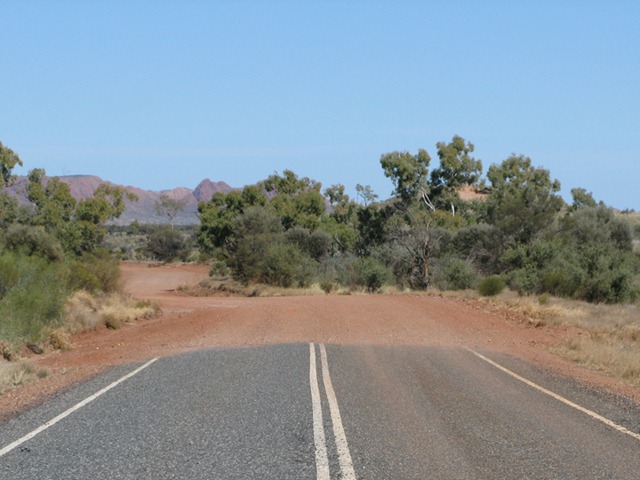 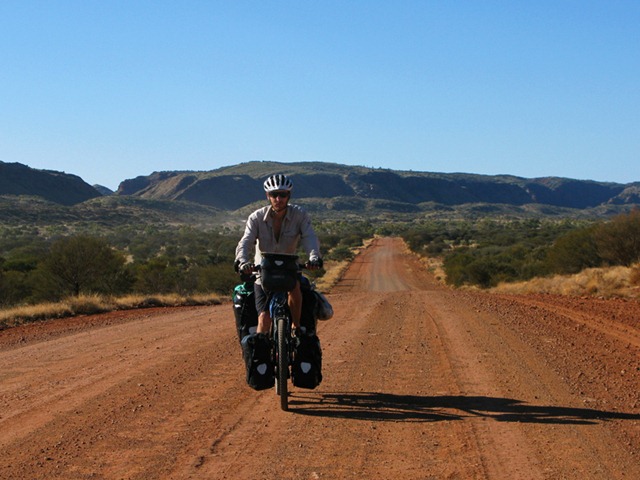 We saw the telltale strips of toilet paper fluttering on a bush and were quietly relieved when we found the 10l water box. It even contained two complimentary chocolate bars – thanks Andrew and Therese! A few hundred metres on we found a quiet place to set up camp. Unfortunately it turned out that we had taken over the resting place of a bull who was not impressed but we were too tired to move on so stood our ground and soon he left after some stomping and snorting.

Thanks to our water drop, we now had plenty of water for the remaining two days of cycling. We were using about 6l of drinking water per day (combined), plus 4l for each night of camping. Negotiating the sandy, rocky and corrugated road surface required a lot of concentration, and we became tired of staring intently at the road all day instead of enjoying the scenery. Our shoulders and knees were hurting from the weight of the bikes, and the rough road sometimes made us feel as if we were in a washing machine.

Although we were in a remote area now, we still saw about 20 cars per day. Most of the time the cars were announced by large dust clouds so that we could spot them from far away. Not all cars had dust clouds, this one wasn’t going anywhere fast and with the cost of car recovery so high, sometimes abandonment is the only option. 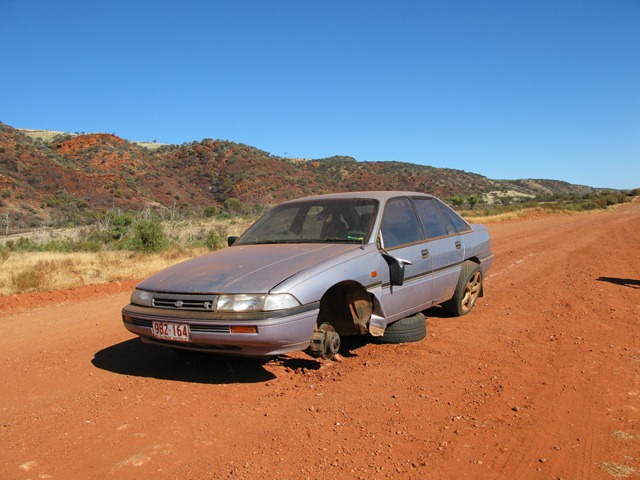 Trudging along over a crescent in the road a 4WD slowed down and the driver yelled:

“I don’t suppose you guys would like some Swiss chocolate.”

The driver turned out to be Patrick, a friend of Andrew and Therese who had been instructed by them to look after us when he saw us en route!

A little further on we came across another example of why we have really loved cycling in the Territory, things are a little different out there. An example of how they signal to motorists to slow down for the sharp corner ahead: 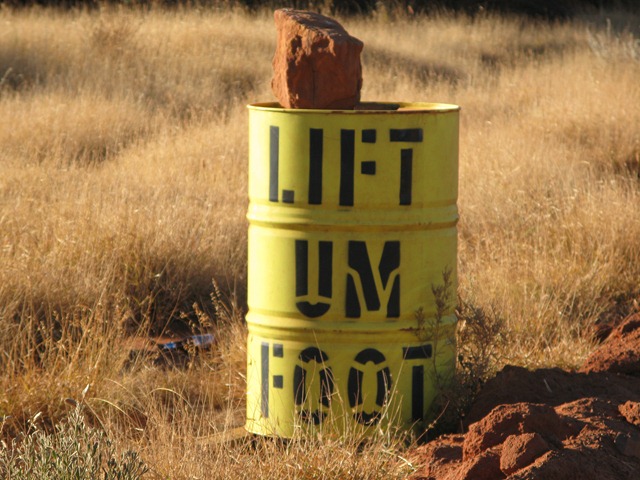 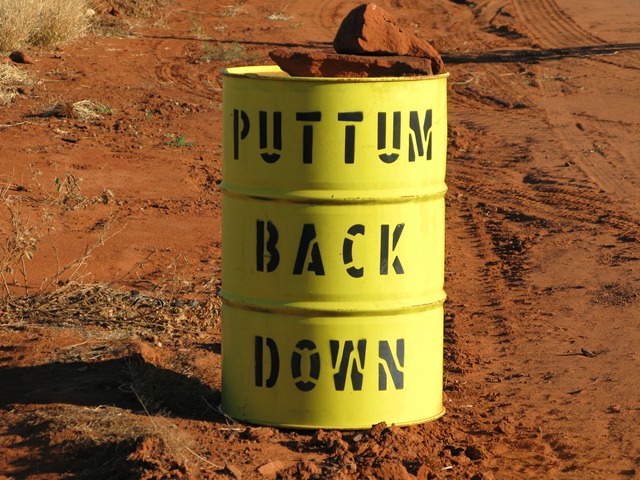 Due to the recent rains, the road had been damaged and roadworks were taking place. We were very lucky that a 40km section of the road had just been graded, making the surface much smoother to ride on. Without these “bonus kilometres” we would have struggled to make it through the whole Mereenie Loop in our scheduled 3 days.

All along the road we had been spotting camel foot prints on the sandy edges. Some were huge, almost the size of a dinner plate, while others alongside were much smaller. Finally we spotted a family of three camels walking on a ridge parallel to the road – a huge male camel followed by a female and a smaller young one. We managed to take a few pictures before they fled down the hill and out of view. 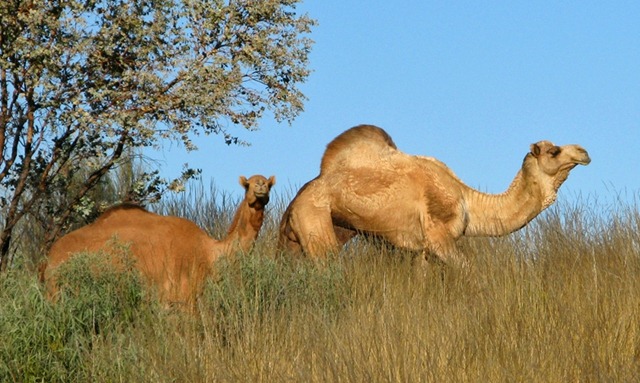 Camels had originally come to Australia with the Afghan workers building the Ghan railway through the desert. They had been used by many expeditions to transport supplies to remote communities. Being suited to the arid conditions, there are many wild camels in Australia now and we recently heard that Australia even exports camels to Saudi Arabia!

Just as it was time to camp, Freddie’s bike started making worrying noises. A quick examination showed that one of the screws that attached the rear rack to the bike had been sheared off. The rough road and heavy load on the rack had taken its toll. Luckily the bike engineers had pre-empted this situation and allowed for a secondary screw thread so all we had to do was readjust the rack to fit in the new position, hats off to you SJS Cycles! 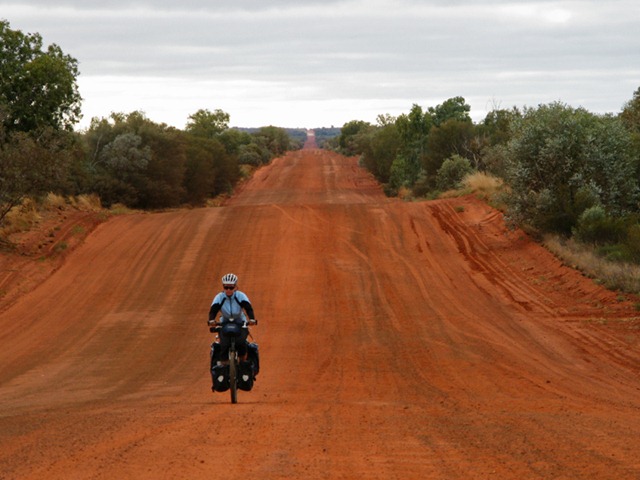 At night, there was total isolation. From the moment it got dark at 6pm until about 8am, no vehicles, no people, absolutely no one passed us at all. There were no settlements nearby, no phone reception, we were totally alone. We relished this rare chance to experience perfect isolation and really enjoyed sitting around our little camp fire under the stars in this huge expanse of emptiness.

The road went from rough to diabolical for the last 30km or so, and there was nowhere to escape the rough surface. The choice was mostly between rattling along on the deep corrugations that covered the whole width of the road at 3km/hr, or risking the sandy edges with over an inch of soft sand.

Suddenly we hit the tarmac, a real surprise as we had calculated it to come a little later. We were feeling pretty smug that we had made it, pumped up the tyres again and screamed down a hill, enjoying the fast ride on the beautiful tarmac road.

We couldn’t believe our eyes when 1km later, the tarmac ended and we were back on the dirt for another 15km of corrugations, so we deflated the tyres again and grimly pushed on not feeling so smug! 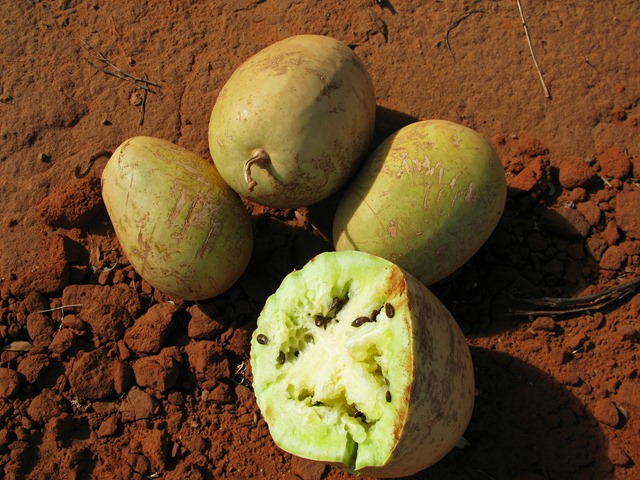 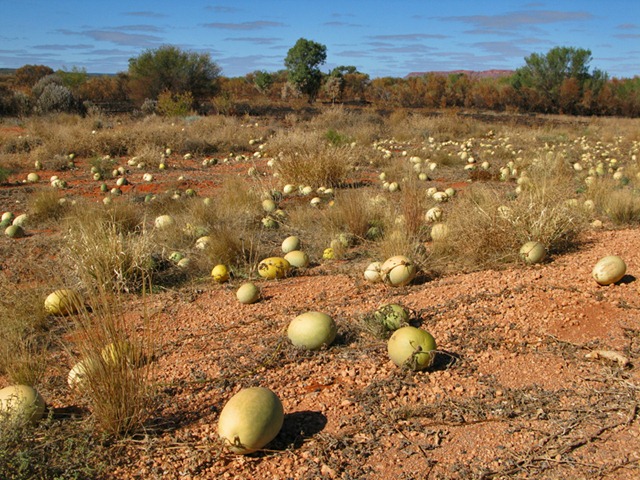 This part of Australia is usually known as the “Red Centre”, but due to the strong rains this year it looks more like the “Green Centre”. All along the road are juicy wild melons. We weren’t sure if they were edible, but the area was just littered with them, very tempting.

Soon after we hit the tarmac for real and blazed along for the last 10km towards Kings Canyon. 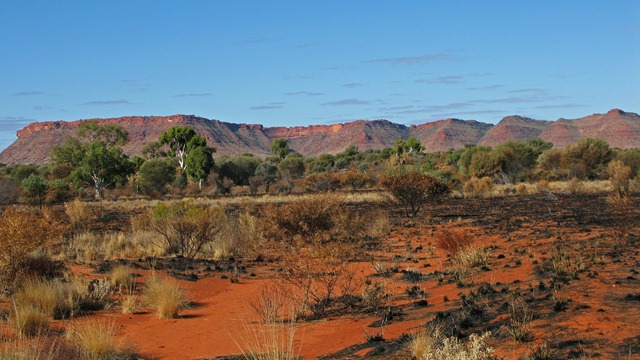 As we rolled into Kings Canyon Resort, we were happy and proud that we had conquered the Mereenie Loop with minimal damage to the bikes and ourselves. We also accepted the realisation that corrugated dirt roads on a fully loaded touring bike is not our idea of fun. It’s ok to get to somewhere special, but we love the sensation of cycling and taking in the scenery, something that is very difficult to do when you are so focussed on keeping your balance from one corrugation to the next.||