We lay on bed watching the television in Bratislava. I saw it very quickly, a shadow scurry behind the TV set, small in size, but distinct in movement and shape. In the walls of a Hostel this meant one thing, bed bugs! Irritating, blood sucking insects that love to nest in your clothes and get into the most unwanted of body regions.|| 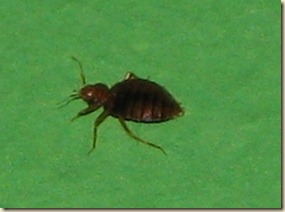 I informed the nice young chap at reception that our room was crawling with bugs. "We have no spray and all our rooms are fully booked. We do have some "stop-your-dog-pissing-here" spray", he said holding up a spray can with a picture of a dog pissing and a big red cross through it. I looked into his eyes for a glimmer of humour, there was none.

Back in the room Freddie had her lets-be-practical hat on. Ok, so we sleep in our silk liners, our bodies will be covered, the only places they can get to our are faces and arms. Good night darling. And with that the lights went out.

You what! I thought to myself, not letting on I wasn’t totally comfortable with the idea. Within seconds Freddie was asleep. I lay there wide eyed, stiff as a plank, skin prickly with the thought of the beds bugs scurrying down the wall, onto the bed and straight to my armpits and nether regions. Calm down, be a man, think of Bear Grylls. He wouldn’t be bothered by a few bugs.

What about Boris? Yes, we could pitch our tent, it’s a small room but if you turn all the furniture on it’s end and stack it high to the ceiling then it might just work.

"Freddie, Freddie, why don’t we pitch Boris". I whispered with a "aren’t I clever" sort of tone.

"Go to sleep". came the response

I closed my eyes and tried to relax, thinking of sunny meadows, but soon even my calming imagery was invaded by swarming bugs. It’s no good, I could sense their presence. I switched on my head torch, revealing a mass scurry of half a dozen bed bugs en route for the bed. I noticed the torch light had stunned them like rabbits in a headlight. As soon as the beam was off them the scurry would continue. Carefully keeping beam focussed I reached down with my other hand for the Bratislava guide book. BAAM BAAM BAAM, bug juice splattered the walls, the first invasion had been successfully stopped in its tracks.

Scanning the walls I could still see little heads peering out from under picture frames and cracks in the plaster. I knew there was another attack imminent. I killed the light, waited for a few minutes, again BAMM BAMM, second wave eliminated. By now I felt charged, surely they couldn’t sustain the attack? I estimated another 50, 100 tops could be in waiting. 10-20 more sessions over the course of an hour and I would finally be in peace.

Two and a half hours later the threat was as strong as ever, I could no longer hold fort, my arms were tired, my vision blurry, yet still they came, relentlessly, wave after wave. I lay down like a wounded soldier, defiant in battle but ultimately defeated. I pulled my sleep liner up to my chin, killed the light one more time and let nature take its course.

The next morning, feeling very irritated that we had to pay for the privilege, I stormed downstairs ready to ask for a refund. Kindly the girl at reception had already pre-empted our unhappiness and discounted the first night, as well as arranging for an exterminator to come in. She also gave us sole use of a 10 bed dorm while our room was turned upside down and inside out and sprayed all over. 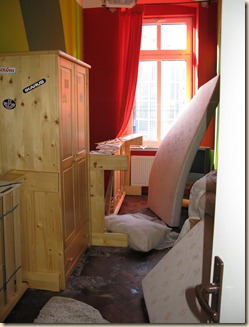