A Night of Adventure

On Monday night we went to “Night of Adventure”, a charity event held in the Vue Cinema in Leicester Square, London. This was a very inspiring evening with 15 professional adventurers, each presenting 20 picture slides about their adventures.||

The speakers ranged from a 24 year old girl rowing across the Indian Ocean, to a guy skateboarding across Australia and a cave explorer mapping unexplored caves in Spain. There was also a guy living in a self-built tree house in England for 6 months, as well as a team of women from tropical countries who skied to the South Pole, a guy who paddled down the Amazon and a couple motorbiking down the Panamericana highway.

One of the most inspiring speakers was Miles Hilton-Barber who is “blind as a bat” and realized at the age of 50 that "the only limits in our lives are those we accept ourselves." He went on to run the Marathon des Sables, a 6-day endurance race across the Sahara desert. He then got his pilots licence and undertook a flight from London to Sydney in a micro-light plane. He has also hauled a sledge across Antarctica, climbed Mt Kilimanjaro and set the Malaysian Grand Prix record for a blind driver. He was a very animated speaker, and threatened to give the whole audience a kick up the backside, challenging us to do something we’ve never done before.

One of the main organisers of this event was Alastair Humphreys, whose books about his 4-year bicycle journey around the world have been a huge inspiration for us. He has been working with Hopes and Homes for Children for many years now, and did a fantastic job arranging such a great line-up of speakers for the event.

We certainly left with new inspiration and are buzzing more than ever. There is more good news too: We did a test bike ride for the first time after my little “operation”, and my back feels absolutely fine so far! 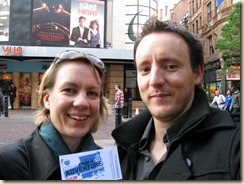 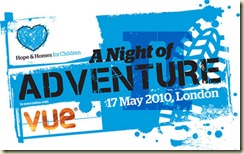